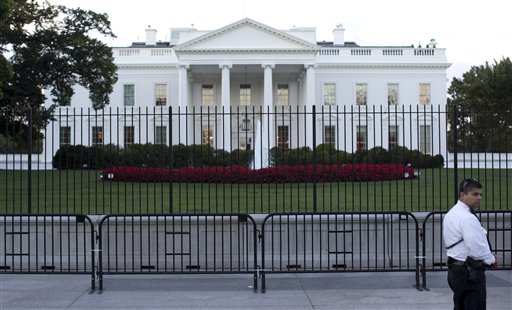 In 1972, Robert Sherrill, a journalist for The Nation, filed a lawsuit alleging First Amendment violations when he applied for a White House press pass and was denied. The D.C. Circuit Court in 1977 said the journalist was entitled to notice, an opportunity to rebut, and a written decision. The circuit court also said the First Amendment guarantee of freedom of the press "requires that this access not be denied arbitrarily or for less than compelling reasons." (AP Photo/Carolyn Kaster from 2014, used with permission from the Associated Press)

In Sherrill v. Knight (1977), the U.S. Court of Appeals for the District of Columbia Circuit ruled that the First Amendment limited the right of the White House to arbitrarily deny a press pass to a journalist.  The appeals court explained that there needed to be procedural protections involved in the issuance and denial of such passes.

The case involved journalist Robert Sherrill who wrote for The Nation and had passes for the galleries at the U.S. House of Representatives and the United States Senate.  In 1966, he applied for a White House press pass but was denied.  The Secret Service told the White House Press Secretary for President Lyndon B. Johnson, Bill Moyers, that the pass should be denied.  The Secret Service further said that the reasons for the denial should not be disclosed to Sherrill or The Nation.

Sherrill also applied for a White House press pass in 1972 and again was denied.  The American Civil Liberties Union filed a Freedom of Information request to determine why Sherrill was denied a pass.  The Secret Service denied the request, saying the information was exempt from disclosure.  Another government official later indicated that Sherrill was considered a security risk because he had been arrested for physical assault in Florida.

Sherrill then filed a federal lawsuit, alleging that the denial of a White House press pass violated his First Amendment and due process rights. The district court remanded the case to the Secret Service, ordering the agency to “devise and publicize narrow and specific standards" for press pass denials and to inform denied journalists the reasons for their denial.

Sherrill then appealed to the D.C. Circuit, which ruled that the Secret Service did not have to disclose discrete standards for the issuance and denial of passes.  However, the D.C. Circuit largely affirmed the lower court, because it ruled that denied journalists were entitled to notice, an opportunity to rebut, and a written decision.

The government argued to the D.C. Circuit that members of the press are not entitled to any greater rights of access than the general public and, thus, that there is no valid First Amendment claim unless the journalist could show that he was denied a press pass based on the content of his speech.

The D.C. Circuit explained that the White House had voluntarily opened up access to Washington-based journalists.  “White House press facilities having been made publicly available as a source of information for newsmen, the protection afforded newsgathering under the First Amendment guarantee of freedom of the press requires that this access not be denied arbitrarily or for less than compelling reasons,” the D.C. Circuit wrote.

The circuit explained: “In our view, the procedural requirements of notice of the factual bases for denial, an opportunity for the applicant to respond to these, and a final written statement of the reasons for denial are compelled by the foregoing determination that the interest of a bona fide Washington correspondent in obtaining a White House press pass is protected by the First Amendment.”

The circuit explained that protecting the physical security of the President was a compelling interest but that the generic use of the term security was too vague.

Some have drawn parallels of the Robert Sherrill situation to the 2018 imbroglio involving the White House withdrawing a press pass to CNN reporter Jim Acosta.