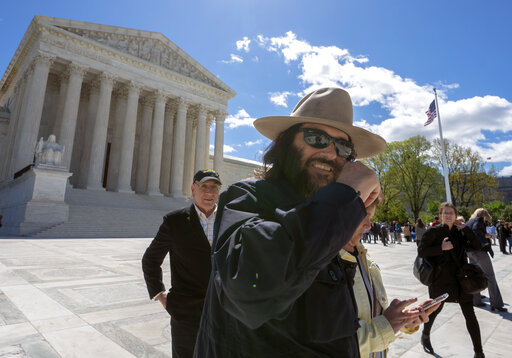 Los Angeles artist Erik Brunetti, the founder of the streetwear clothing company "FUCT," leaves the Supreme Court after his trademark case was argued, in Washington, Monday, April 15, 2019. Brunetti says the brand name is an acronym for "Friends U Can't Trust." In its decision in June 2019, the Supreme Court overturned the federal law that says officials should not register trademarks that are "scandalous" or "immoral." (AP Photo/J. Scott Applewhite, used with permission from The Associated Press.)

In Iancu v. Brunetti (2019), the U.S. Supreme Court invalidated a provision of federal trademark law that prohibited “immoral or scandalous” marks. The Court viewed the provision as sanctioning viewpoint discrimination and also as substantially overbroad.

Erik Brunetti, an artist and entrepreneur, founded a clothing line with the trademark FUCT, which he said stood for Friends U Can't Trust.   He sought to register the trademark, as official registration brings additional benefits to the trademark owner.  However, the Patent and Trademark Office determined the proposed mark was “a total vulgar” and had “decidedly negative sexual connotations.”

The Patent and Trademark Office sought U.S. Supreme Court review.   The Court affirmed the decision of the lower court.

In her majority opinion, Justice Elena Kagan determined that, like the ban on disparaging marks invalidated in Matal v. Tam (2017), the “immoral or scandalous" marks provision discriminated on the basis of viewpoint.

Kagan recounted a long list of rejected marks to show the viewpoint discriminatory application of the law.  The government sought a narrower construction, but Kagan wrote: “The statute as written does not draw the line at lewd, sexually explicit, or profane marks.”

She also determined the law was substantially overbroad: “There are a great many immoral and scandalous ideas in the world (even more than there are swearwords) and the Lanham Act covers them all.  It therefore violates the First Amendment.”

Alito: Viewpoint discrimination is poison to a free society

Chief Justice John G. Roberts, Justice Stephen Breyer, and Justice Sonia Sotomayor all wrote opinions concurring in part and dissenting in part.   They generally agreed that the part of the provision banning “immoral” marks was viewpoint discriminatory.   However, they viewed that the “scandalous” portion of the provision could be saved by a narrowing construction.

Roberts explained: “The First Amendment protects the freedom of speech; it does not require the Government to give aid and comfort to those using obscene, vulgar, and profane modes of speech.”

For his part, Breyer once again contended that the Court should avoid deciding First Amendment cases on what he termed “speech-related categories” but should use what he calls a “proportionality” analysis.  Under this analysis, the Court would consider whether a regulation’s harm to speech is disproportionate in light of the government’s regulatory interests.

Sotomayor wrote the most comprehensive of the three partial dissenting opinions.  She wrote that “it is equally possible to read that provision’s bar on the registration of ‘scandalous’ marks to address only obscenity, vulgarity, and profanity.”