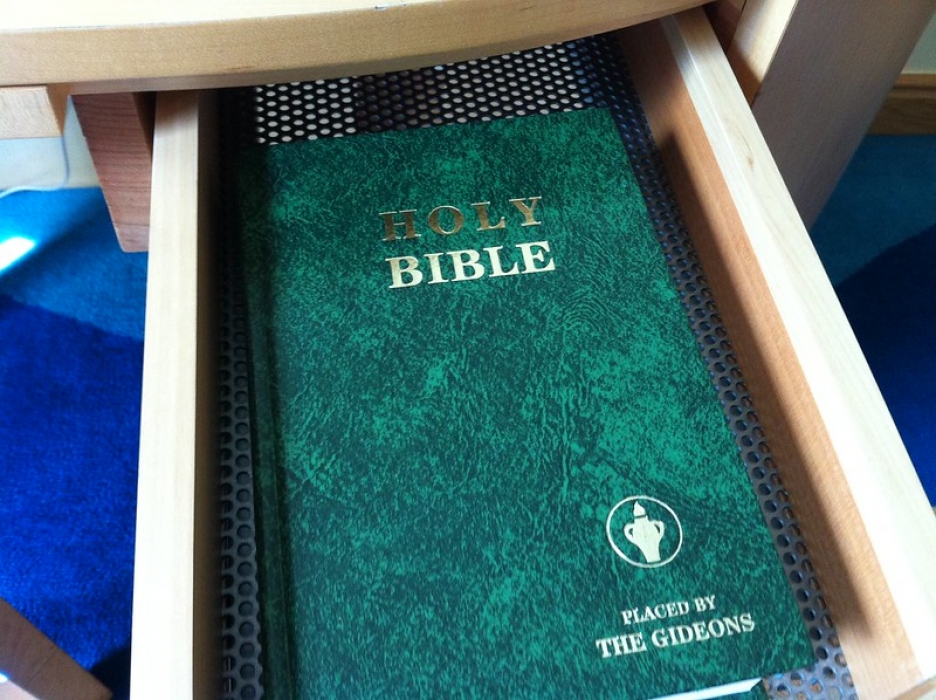 The U.S. Supreme Court does not appear to have decided on the constitutionality of distributing Bibles to children in public schools, but a leading case written by the Chief Justice of New Jersey has ruled against the practice and provided substantial reasons for doing so. In Tudor v. Board of Education of Borough of Rutherford (1953), the Court found that the distribution of Bibles in public schools by the Gideons violated the separation of church and state requirement in the First Amendment. (Photo of a Gideon Bible by Sean MacEntee via flickr, CC BY-2.0)

The Gideons are a group that originally consisted of traveling salesmen whose purpose is to distribute scriptures in order to win people to Christ.  They are perhaps best known for their goal of placing a Bible in each motel and hotel room in the United States, but they have also targeted military personnel and children in public schools.

They typically distribute the King James Version of the New Testament, often including the book of Psalms and (sometimes) Proverbs from the Old Testament, or Hebrew Scriptures.  These efforts have sometimes been challenged on the grounds that they violate the First Amendment establishment clause and the due process clause of the Fourteenth Amendment.

The U.S. Supreme Court does not appear to have decided on the constitutionality of distributing Bibles to children in public schools, but there is a leading case written by the Chief Justice of New Jersey and agreed to by a unanimous court, which is legally binding only in that state (Kruse 2015, 169), that has ruled against the practice and provided substantial reasons for doing so.

The decision in Tudor v. Board of Education of Borough of Rutherford, 14 N.J. 31, 100 A.2d 857 (1953), which was written by Arthur T. Vanderbilt, involved the attempt by the Gideons to distribute their Testaments to public school children in grades five through eight.

Although the schools made provisions for parents to sign a form indicating that they were willing for their children to receive these scriptures, the practice was challenged by a Roman Catholic parent, who objected to the use of the King James Version (but whose case became moot when he transferred his child to a parochial school) and a Jewish parent who did not accept the Christian New Testament as Scripture.

New Jersey Court focused on separation of church and state

In writing his opinion, Vanderbilt provided an extensive survey of religious history, going back to the Roman Empire and early America and highlighting the rise of religious toleration and separation of church and state in the United States.   He gave particular attention to the adoption of Jefferson’s Act for Establishing Religious Freedom in Virginia and of the Supreme Court’s invocation of this law when interpreting the establishment clause in Everson v. Board of Education (1947).

Recognizing that the First Amendment, which originally applied only to the national government, now also applied to the states, Vanderbilt also evoked Article I, paragraph 4 of the New Jersey Constitution that “there shall be no establishment of one religious sect, in preference to another.”  Recognizing that there was continuing debate about whether either provision was designed to erect a wall of separation between church and state, Vanderbilt observed that judicial decisions at both the state and national level had honored the rights of parents to decide on their religious upbringing and opposed “a preference for one religion over another,” which he further classified as a form of “favoritism.”

As to arguments that the parental consent forms provided for a suitable “accommodation” of religion, Vanderbilt said that this argument ignored “the realities of life” in public schools.

Much as the U.S. Supreme Court would later rule in cases involving public school prayers (Engel v. Vitale, 1962) or Bible reading (Abington School District v. Schempp, 1963) in schools, Vanderbilt stressed that those student who parents took them out of classes would feel excluded and that such separation could be divisive.

Distinguishing this case from the released time program for religious instruction that the U.S. Supreme Court had approved in Zorach v. Clauson (1952), Vanderbilt observed that “It matters little whether the teachers themselves will distribute the Bibles or whether that will be done by members of the Gideons International.  The same vice exists, that of preference of one religion over another.”

The author of a recent law note, however, observes that the Gideons might have a constitutional opening to distribute Bibles through the open forum doctrine.  That is, if schools have created an open or limited public forum for the distribution of other forms of literature (and not simply for the purpose of aiding the Gideons) they might, under the precedent of Good News Club v. Milford Central School (2001), be equally entitled to distribute literature as other groups.

In such a case, specifically banning the distribution of Bibles could be an unconstitutional form of viewpoint-based discrimination.  The note observes that such distributions might be appropriate “only when there is a true limited public forum: (1) distribution takes place outside the classroom; (2) no school personnel are present; and (3) other similar types of speech are also permitted” (Clark 2008, 420-421).

John Vile is a professor of political science and dean of the Honors College at Middle Tennessee State University. He is co-editor of the Encyclopedia of the First Amendment. This article was published April 3, 2020.