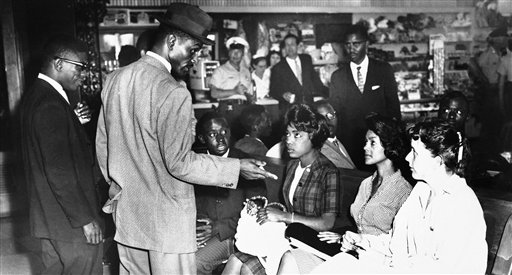 The Rev. Fred L. Shuttlesworth (pointing) talks with students in the white waiting room in the Birmingham, Alabama, bus station in 1961. Shuttlesworth was a Birmingham civil rights leader who fought for integration. He was arrested after leading a march in 1963 to protest institutionalized segregation. The Supreme Court overturned the conviction in Shuttlesworth v. Birmingham, finding that the permit law under which he was convicted was applied in a way that violated the First Amendment. (AP Photo, used with permission from the Associated Press)

In Shuttlesworth v. Birmingham, 394 U.S. 197 (1969), the Supreme Court ruled that the conviction of the Rev. Fred Shuttlesworth, for leading a protest march without a permit, was improper because the ordinance under which he was convicted was an unconstitutional prior restraint on speech.

The ordinance in question prohibited a “parade or procession or other public demonstration” without a permit and afforded the Birmingham City Commission broad discretion in issuing permits.

Shuttlesworth was arrested, convicted after leading a civil rights march in Birmingham

Shuttlesworth nonetheless led the march of 52 African Americans on Good Friday 1963 without disrupting traffic or violating traffic laws. He was convicted, fined, and sentenced to more than three months’ hard labor. The Alabama court of appeals reversed, but the Alabama Supreme Court construed the statute more narrowly and reinstated Shuttlesworth’s conviction.

The U.S. Supreme Court, which approved of the narrow construction of the ordinance that the Alabama Supreme Court had articulated, nevertheless voted 8-0 in finding the city’s action to be an as-applied prior restraint on speech that was enforced in a racially discriminatory manner. (Justice Thurgood Marshall did not participate.)

Unlike the Court’s decision in Cox v. Louisiana (1965), in which the justices had upheld a similar law, the evidence in this case showed that the ordinance was not being applied in a way that was nondiscriminatory.

Although Justice Potter Stewart, writing for the Court, reemphasized the rule set out in Cox that states may set time, place, and manner restrictions on speech to logistically manage dueling uses of public streets, he maintained that the state may only do so in a nondiscriminatory manner. This Birmingham had failed to do.

Justice John Marshall Harlan II concurred, believing that aggrieved citizens would have little incentive to seek review through administrative and judicial procedures if otherwise constitutional laws were allowed to be applied unconstitutionally. Instead, they would follow Shuttlesworth’s example and simply violate the law.

Citing Freedman v. Maryland (1965), in which the Court held that a state could not employ “unduly cumbersome and time-consuming procedures” as a vehicle for denying an individual his or her “constitutional right of expression,” Harlan argued that the ruling was more appropriately based on the theory that Shuttlesworth was “not obliged to invoke procedures which could not give him effective relief” while a fundamental right was at stake by Connor’s capricious and discriminatory application of the ordinance in question.