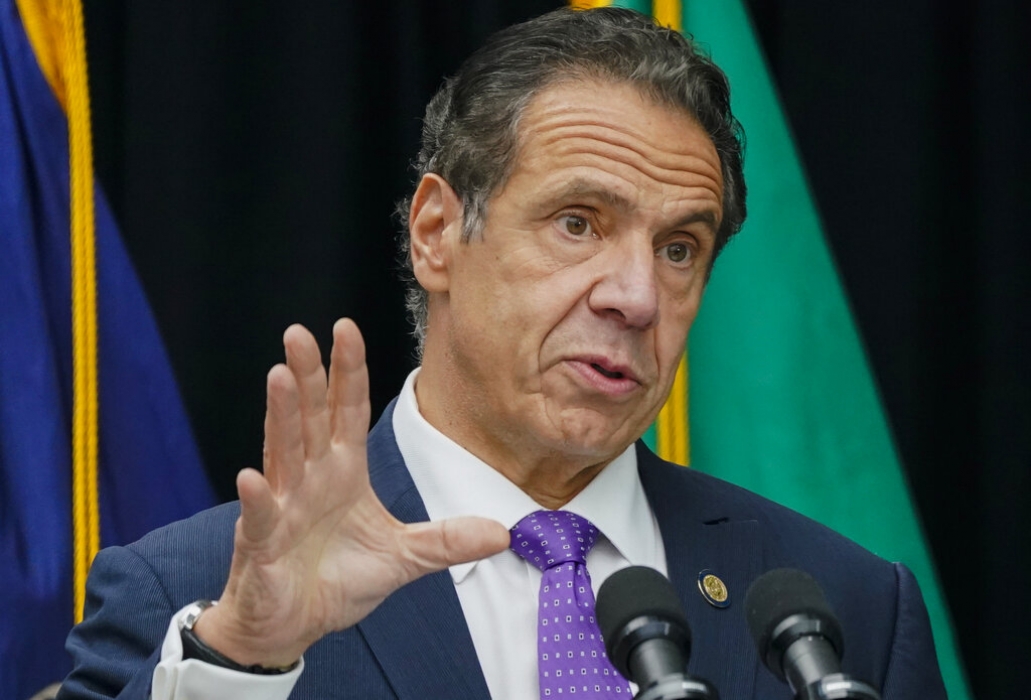 The U.S. Supreme Court issued a preliminary injunction to stop an executive order by Gov. Andrew Cuomo of New York that limited gatherings in houses of worship as a way to reduce the spread of COVID-19. The court, in a 5-4 decision, ruled that it was likely the plaintiffs would prevail in their claim that the order violated the First Amendment's right of free exercise of religion. (Photo of Andrew Cuomo, Oct. 12, 2020, AP Photo)

After having rejected two previous opportunities to intervene in lower court cases involving COVID-19 regulations that applied to houses of worship in California and Nevada, the U.S. Supreme Court issued a preliminary injunction on Nov. 25, 2020, in Roman Catholic Diocese of Brooklyn v. Cuomo, 592 U.S. ____ (2020).

The court prevented application of New York Gov. Andrew Cuomo's executive order that limited the number of individuals who could gather in places of worship while a case challenging the order is being considered by the 2nd U.S. Circuit Court of Appeals. The Supreme Court decision responded to appeals by the Roman Catholic Diocese of Brooklyn and by the congregation of Agudath Israel of America.

The unsigned per curiam decision was by a narrow 5-4 majority and was joined by newly appointed Justice Amy Coney Barrett, who had replaced Justice Ruth Bader Ginsburg on the court. It was based on the free exercise clause of the First Amendment as applied to the states through the due process clause of the Fourteenth.

Cuomo’s order had limited attendance at worship services to 10 people in areas designated as red zones because of high COVID-19 infection rates. Those in orange zones were limited to 25. The court majority concluded that the plaintiffs had shown “that their First Amendment claims are likely to prevail, that denying them relief would lead to irreparable injury, and that granting relief would not harm the public interest.”

In ascertaining the likelihood of success, the majority said that the plaintiffs had made a strong case that the governor’s order violated “the minimum requirements of neutrality” because it singled out churches for special treatment. The opinion noted that the order had exempted from such restrictions a large number of so-called “essential” businesses such as big box and liquor stores. Because the regulations were not neutral, they were unlikely to survive the strict scrutiny that courts apply to fundamental rights in the First and Fourteenth Amendments.

Although the government had a compelling interest in controlling the pandemic, the court reasoned it was unlikely that it could establish that the governor’s order, which was more restrictive than similar orders in other states, had been narrowly tailored to meet these interests. The state could have tailored the permissible size of the crowd to the size of the house of worship. Moreover, limiting freedom of worship, even for limited times, constituted “irreparable harm,” the court said.

Acknowledging that members of the court were not health experts, the majority observed that “even in a pandemic, the Constitution cannot be put away and forgotten,” especially when such regulations “strike at the very heart of the First Amendment’s guarantee of religious liberty.” Acknowledging that Cuomo had subsequently reclassified the areas from orange to yellow, allowing places of worship to accept 50% of their capacity, the majority did not think the issue was moot because “the applicants remain under a constant threat that the area in question will be reclassified as red or orange.”

Justice Neil Gorsuch issued a concurring opinion in which he reiterated that the government could not disregard the Constitution in times of crisis. He affirmed that worship was just as essential as other businesses where the total number of people who could gather was not capped. He did not think that the case of Jacobson v. Massachusetts (1905), which had upheld a state law requiring either a vaccination or the payment of a fine, was intended to have such a broad impact on religious freedom. Noting the time that the case had already taken to get to the Supreme Court, and the possibility that the restrictions might be reimposed, Gorsuch further denied that the issue was now moot.

In a separate concurring opinion, Justice Brett Kavanaugh noted that the injunction would only remain in place until the circuit court could give a full review. Although he was willing to give “substantial deference to state and local authorities” on matters of public health, he pointed out that the New York restrictions on worship were more severe than those in other states. Moreover, since the governor had already redesignated the zones in which the churches were located, the current injunction could do no harm.

In his dissent, Chief Justice John Roberts acknowledged that limits of 10 and 25 people “do seem unduly restrictive,” but he saw no immediate need to intervene given that the governor’s most recent identification of zones no longer imposed such strict restrictions.

Justice Stephen Breyer issued a dissent joined by Justices Sonia Sotomayor and Elena Kagan. This opinion stressed that although the order had treated houses of worship differently than grocery stores, banks and other businesses, the rules it established for religious bodies also applied to similar meetings at public lectures, concerts, and theatrical performances where — as in places or worship — people were more likely to be gathered together more closely for longer periods of time. The opinion further anticipated that the circuit court would act expeditiously on the matter.

A finial dissent authored by Justice Sotomayor and joined by Justice Kagan pointed back to the Court’s decision not to issue similar injunctions in the cases of South Bay United Pentecostal Church v. Newsom (2020) and Calvary Chapel Dayton Valley v. Sisolak (2020). It further questioned the wisdom of second-guessing decisions by state and local officials on issues related to public health. Sotomayor did not believe that Cuomo’s order had treated houses of worship in a discriminatory fashion.

Justices Thomas, Alito, Gorsuch, and Kavanaugh had joined dissents from the denials of injunctions in the less restrictive California and Nevada cases, with Chief Justice Roberts authoring a concurring opinion in the California case.

John Vile is professor of political science and dean of the Honors College at Middle Tennessee State University. He is co-editor of the Encyclopedia of the First Amendment. This article was published on Dec. 1, 2020.