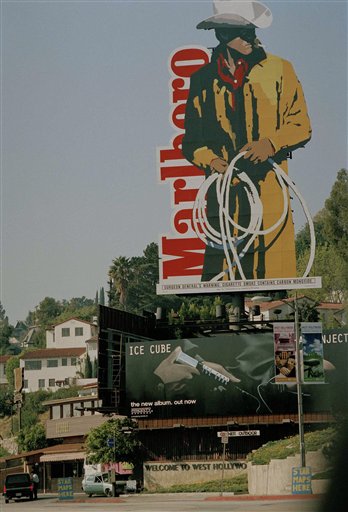 How much a state could limit outdoor advertising of cigarettes through regulations was at issue in the Supreme Court case, Lorillard Tobacco Co. v. Reilly, 2001. The court found that some of Massachusetts's advertising limits violated the First Amendment because they were not narrowly tailored to accomplish the state's goal of protecting children. (In this photo, a billboard advertising Marlboro cigarettes overlooks Sunset Boulevard in the Beverly Hills section of Los Angeles, Calif., Jan. 9, 1994, AP Photo, used with permission from The Associated Press.)

The Court affirmed lower court rulings in part and reversed them in part, finding that some regulations targeting specific cigarette advertising and sales practices violated the First Amendment.

Massachusetts’s attorney general Thomas F. Reilly had promulgated a comprehensive set of regulations relative to tobacco sales and advertising. A group of tobacco manufacturers and retailers challenged the tobacco regulations, claiming that they were pre-empted by the FCLAA and violated the First and Fourteenth Amendments.

The District Court upheld the regulations in part — finding they do not violate the First Amendment — and reversed in part — finding they are not pre-empted by the FCLAA. The First Circuit Court of Appeals found that the FCLAA pre-empts any “requirement or prohibition based on smoking and health . . . with respect to the advertising or promotion of . . . cigarettes.”

Writing for the majority, Justice Sandra Day O’Connor agreed with the First Circuit Court of Appeals regarding the FCLAA pre-emption, but the Court also had to address whether Massachusetts’ regulations limiting advertising within 1,000 feet of schools and similar regulations were justified as proper zoning regulations or regulations designed to protect youth.

She decided that “the Attorney General’s outdoor and point-of-sale advertising regulations targeting cigarettes are pre-empted by the FCLAA.”

The Court found that other state regulations were subject to the test the Court developed for commercial speech in Central Hudson Gas and Electric Corp. v. Public Service Commission (1980), which required governments to show that a speech restriction directly and materially advances an asserted interest and that there is a reasonable fit between the legislative ends and means chosen to accomplish them.

Advertising regulations invalidated because they were not narrowly tailored

Although O’Connor found sufficient reason for the regulations, she found that many did not meet the last part of the Central Hudson test.

She also found that the proposed restrictions on outdoor advertising would have prevented advertising in many of Massachusetts’ main cities. Similarly, she invalidated rules requiring that stores put cigarettes on shelves higher than five feet from the floor.

By contrast, she upheld provisions placing tobacco products behind counters and prohibiting their sale through self-service machines as being “narrowly tailored to prevent access to tobacco products by minors.” She observed that such rules aimed specifically at regulating “conduct” rather than at “the communication of ideas.”

Justice Clarence Thomas wrote a longer concurring opinion, arguing that the Court should give greater protection to commercial speech than it had done in Central Hudson and previous cases. He wanted the Court to apply “strict scrutiny” to all such regulations — a position he had advocated in his concurring opinion in 44 Liquormart, Inc. v. Rhode Island (1996).

Thomas observed that a decision that would uphold widespread restrictions on tobacco might just as easily be applied to food advertising (connected to the problem of obesity) and alcohol. He noted: “No legislature has ever sought to restrict speech about an activity that it regarded as harmless and inoffensive. Calls for limits on expression always are made when the specter of some threatened harm is looming. . . . It is therefore no answer for the State to say that the makers of cigarettes are doing harm; perhaps they are. But in that respect they are no different from the purveyors of other harmful products, or the advocates of harmful ideas. When the State seeks to silence them, they are all entitled to the protection of the First Amendment.”

Justice David H. Souter and Justice John Paul Stevens wrote partial dissents. Stevens argued that the intent of federal law in pre-empting state regulation was not as convincing as the majority thought, accepted the majority’s view that Massachusetts had not properly tailored its outdoor advertising rules, but argued that the Court should have remanded the case for further evidence for the determination of other issues.