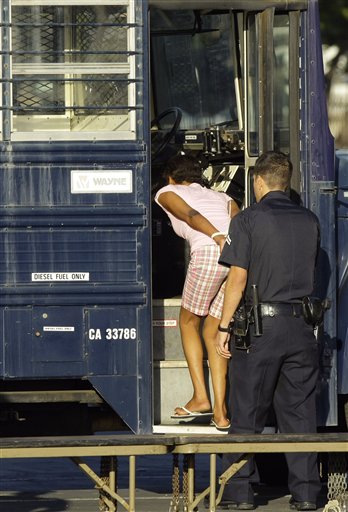 The Supreme Court in Los Angeles Police Department v. United Reporting Publishing Co. (1999) upheld a California law that prohibited the release of arrestee residential addresses to those using them for commercial purposes. The court rejected arguments that the law discriminated against commercial speech. In this photo, a female arrestee is placed on a jail bus by Los Angeles police in 2009. (AP Photo/Damian Dovarganes, used with permission from the Associated Press)

A facial challenge is one in which claimants contend that a law is unconstitutional as written and thus applies to everyone, as opposed to an as-applied challenge, which pertains only to the litigants challenging a law in a given case.

The Court found that the California law did not unduly burden commercial speech.

United Reporting — a company that sold arrestee information to attorneys, insurance companies, and others — pointed out that the law seemingly discriminated against commercial speech by allowing the release of the arrestee information if used for scholarly, journalistic, political or governmental purposes.

A federal district court and the Ninth Circuit Court of Appeals had determined that the California law unduly burdened commercial speech. The government, in its appeal to the Supreme Court, contended that the law was a constitutional way to regulate access to information.

The Supreme Court ruled 7-2 in favor of the government. Writing for the majority, Justice William H. Rehnquist said that for purposes of this facial challenge “what we have before us is nothing more than a governmental denial of access to information in its possession.” Citing Houchins v. KQED (1978), Rehnquist reasoned that “California could decide not to give out arrestee information at all without violating the First Amendment.”

Justice Antonin Scalia, joined by Justice Clarence Thomas, wrote a concurring opinion, emphasizing that the Court’s decision did not foreclose an as-applied (rather than a facial) challenge to the statute.

Justice Ruth Bader Ginsberg — joined by Justices Sandra Day O’Connor, David H. Souter, and Stephen G. Breyer —  also wrote a concurring opinion. She emphasized that the state could choose to “support some speech without supporting other speech” as long as the decision was not “based on an illegitimate criterion such as viewpoint.”

Justice John Paul Stevens, joined by Justice Anthony M. Kennedy, wrote a dissenting opinion, arguing that United Reporting had made both a facial and an as-applied challenge to the statute. He reasoned that the state law was unconstitutional “because at its core it relies on discrimination against disfavored speech.”