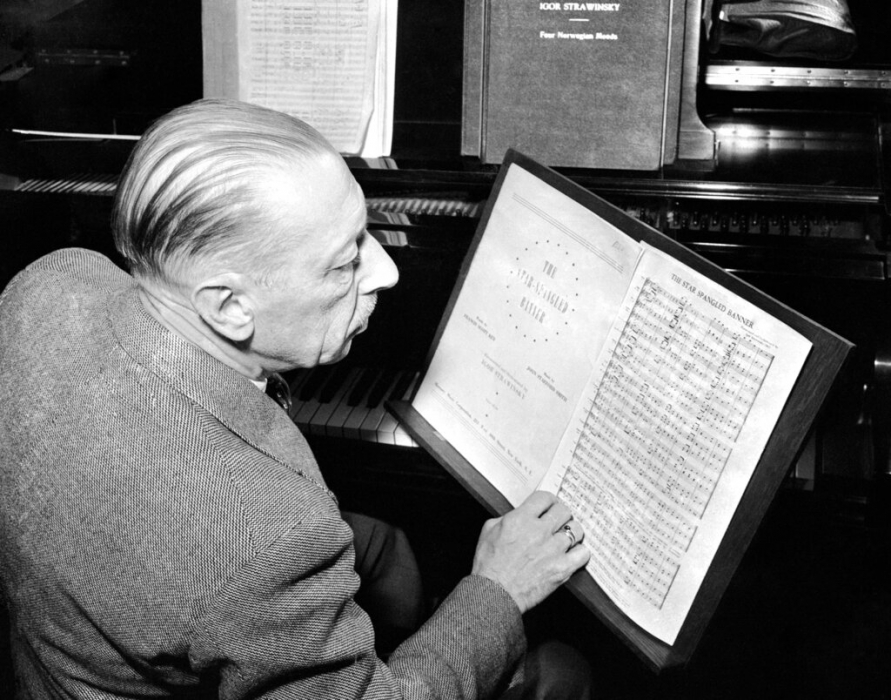 In this Jan. 12, 1944 photo, Russian composer Igor Stravinsky looks over the score of his own harmonization of "The Star-Spangled Banner." Stravinsky said he retained the familiar melody of the national anthem but changed the harmony and went back to the music of Puritan times for a choral-like treatment. A Massachusetts law had been invoked that restricted any changes to the anthem when performed or sung. Today, embellishments to a performance of the national anthem would be considered protected as free expression and such laws, such as the Massachusetts law, would be unconstitutional violation of First Amendment rights (AP Photo)

Long before Congress declared Francis Scott Key’s “The Star-Spangled Banner” to be the national anthem in 1931, its rendition had become a common way of celebrating patriotism.

Just as laws (later declared to be unconstitutional) developed to protect the U.S. flag against desecration, so too, in 1917, the year that the U.S. entered World War I and at a time before the U.S. Supreme Court had applied the free speech provision of the First Amendment to the states, Massachusetts adopted a law to protect the anthem. It provided that:

The law was not unique. The city of Baltimore had adopted an ordinance in 1916 prohibiting  musical desecration of “The Star-Spangled Banner” as Michigan would later do in 1931 (Vile 2021, 247).

The Massachusetts law, which appears to have been largely moribund, was invoked on Jan. 15, 1944, to prevent Igor Stravinksy, an immigrant from Russia, from conducting the Boston Symphony in a personalized rendition of the national anthem, which he had performed twice before. The audience had found it difficult to sing with the orchestra on its second performance leading to negative reviews that associated the rendition by an immigrant with anti-Americanism.

A picture that purported to be a mug shot of Stravinsky at his arrest later turned out to be a photo from his visa application four years previously.  Stravinsky was not arrested because he complied with the request to conduct the song in its more traditional fashion

Far from attempting to mock the anthem, Stravinsky, who was extremely patriotic, had attempted to convert the song, which often serves during times of war as a call to arms, into a hymn (Clague 2022, 232). Although beautiful in its own right, his arrangement made it difficult for the audience to sing along with the orchestra.

Numerous musicians, including José Feliciano, Whitney Houston, Jimi Hendrix, Aretha Franklin, and René Marie, have subsequently added their own embellishments to the song, sometimes invoking admiration, and sometimes generating scorn. It seems unlikely that current interpretations of expressive conduct under the First Amendment would allow any government to mandate the performing of a single orthodox version.

Most controversies centering on “The Star-Spangled Banner” in recent years have resulted from criticisms of its author’s role as a slaveholder, references to slaves in the third stanza, and from the actions of individuals who sat or took a knee during the rendition of the national anthem in silent protest against police brutality, racism, or other issues. Such expressive conduct remains protected against governmental (albeit not private) action under the free speech clause of the First Amendment, which the Supreme Court has also applied to the states via the due process clause of the Fourteenth Amendment.

A leading scholar of the anthem suggests that this is for the best.  After reviewing numerous variations in the lyrics and musical setting of the piece, he observes that:

If history is a guide, neither revision, variation, translation, reinterpretation, nor error proves an existential threat to the song or its role in American society. Like the nation itself, The Star- Spangled Banner sometimes speaks in a determined dissonant cacophony rather than in a harmonious unity. This resilience is arguably both the anthem’s and the nation’s true strength (Clague 2022, 241).

This article was published Aug. 1, 2022. John Vile is professor of political science and dean of the Honors College at Middle Tennessee State University. He is co-editor of the Encyclopedia of the First Amendment.