By John R. Vile
Other articles in Laws and Proposed Laws, 2008 to present, Issues Related to Speech, Press, Assembly, or Petition 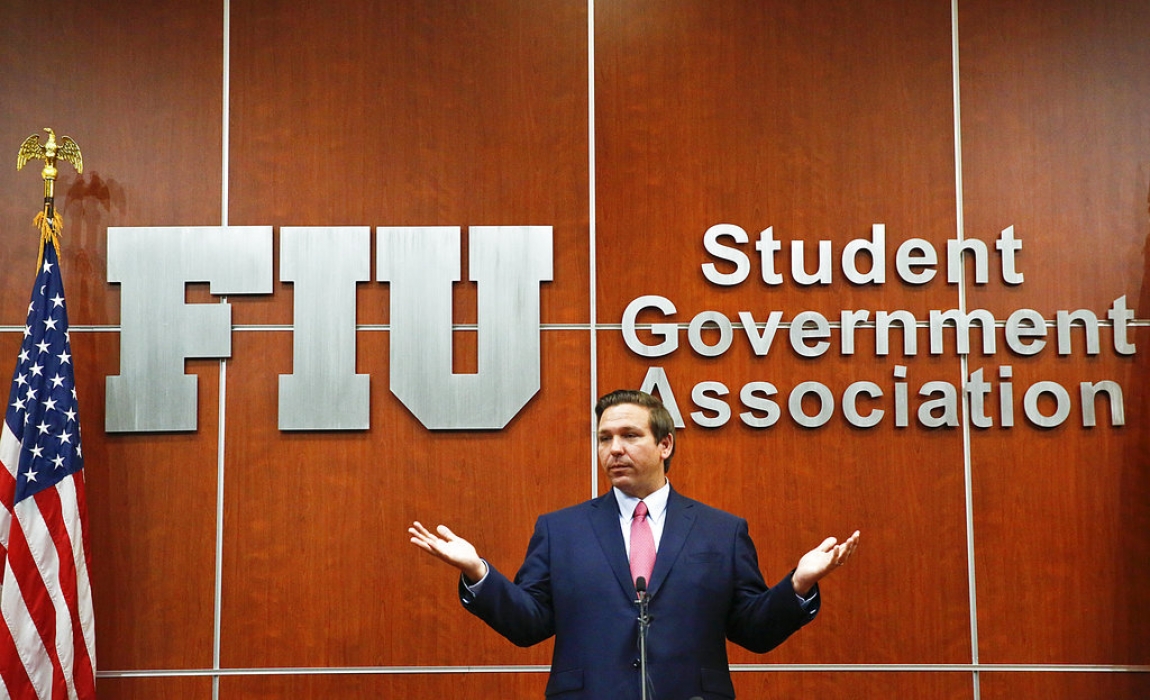 The Florida state legislature, with support of Republican Gov. Ron DeSantis, passed a new law in 2022 known as the "Stop W.O.K.E. Act" preventing faculty from presenting certain viewpoints related race and sex. A U.S. District judge in November 2022 issued a preliminary injunction to prevent enforcement of the law, ruling that the law constituted unconstitutional viewpoint discrimination in violation of the First Amendment. In this photo, DeSantis speaks to College Republicans on the campus of Florida International University in 2018 when he was a Republican gubernatorial candidate. (AP Photo/Brynn Anderson)

In recent years, politicians, especially those on the right, have expressed increasing concern that American education has become more politicized, that there has been an increased emphasis on what is politically correct, and that “wokeness” to historic injustices may have created a false sense of guilt among those who were not responsible for them.

At the same time, plaintiffs have brought another case to the Supreme Court, asking that it reverse previous affirmative action decisions, which while rejecting racial quotas, has permitted educational institutions to consider race as a plus factor in their admissions decisions.

In 2022, with the support of Republican Gov. Ron DeSantis, the Florida state legislature adopted a law known as the “Stop W.O.K.E. Act.," the acronym standing for "Wrong to our Kids and Employees.” The bill was also known as the Individual Freedom Act (IFA). The law prohibited teaching or instruction that “espouses, promotes, advances, inculcates, or compels” students or employees to believe any of eight concepts.

The prohibited teachings were that:

Professors who violated the law could face disciplinary action including termination of their jobs, and state schools that violated the statute could lose performance funding, which constituted a significant portion of their budgets.

The law was challenged both by students and professors.

In November 2022, U.S. District Judge Mark E. Walker for the Northern District of Florida issued a preliminary injunction preventing enforcement of the law. He concluded in Pernell v. Florida Board of Governors that the plaintiffs would likely prevail in their claim that the law violated the First Amendment because it discriminated against speech based on viewpoint and was too vague.

DeSantis' office has told news organizations that it plans to appeal the ruling.

Walker began his order with a quotation from George Orwell’s dystopian novel "1984" by describing the  law as a form of “doublespeak” in which the legislature had declared that “the State has unfettered authority to muzzle its professors in the name of ‘freedom.’” In so doing, Walker denied that state college and university professors were “simply the State’s mouthpieces” or that “so long as professors work for the State, they must all read from the same music.”

Drawing from precedents, Walker indicated that the control exercised by state colleges and universities over curriculum content differed from their lack of control over viewpoints. Although Walker recognized that “the Supreme Court has never definitively proclaimed that ‘academic freedom’ is a stand-alone right protected by the First Amendment,” federal courts had recognized that “academic freedom remains an important interest to consider when analyzing university professors’ First Amendment claims.”

In analyzing decisions in Rosenberger v. Rectors and Visitors of the University of Virginia (1995), a decision involving funding from student activity fees for student publications, and Garcetti v. Ceballos (2006), limiting First Amendment protections for speech by public officials made as part of their official duties, Walker ruled that neither decision had established that everything that professors said in the classroom was understood to be governmentally endorsed and therefore subject to government control under the government speech doctrine. He distinguished between “the State’s right to make content-based choice” in creating curricula from “unfettered discretion in limiting a professor’s ability to express certain viewpoints about the content of the curriculum once it has been set.”

Walker further relied on a U.S. circuit court decision in Bishop v. Aronov, 926 F.2d 10676 (11th Cir. 1991), in which the court had developed tests, to be applied on a case-by-case basis, for distinguishing the right of professors to express opinions on the subjects they were teaching as opposed to opinions on subjects that were not relevant to the subject. The Bishop case involved a professor's religious views in a human physiology class. Although the court supported the university's direction to the professor to teach his Christian perspective on physiology, Walker observed that the decision had specifically recognized “the strong predilection for academic freedom as an adjunct of the free speech rights of the First Amendment.”

Judge: Students have a right to receive information

In regard to the standing of the parties to the case, Walker further noted that the rights of students to receive information was coextensive with the rights of professors to convey such viewpoints.

Walker examined the standing of both students and professors in the case, concluding that most had established such standing. Several professors indicated that if the law remained in effect, they would either have to alter what they taught  to be assured that they would not violate the law (thus chilling their speech) or face possibly dire consequences. Similarly, students demonstrated that they planned to enroll in classes in which such professors might be censoring themselves.  Walker concluded that most plaintiffs in the case could in fact establish an “injury-in-fact” that would be directly traceable to the law they were challenging and that an injunction could remedy.

Walker emphasized that Florida was sanctioning viewpoint discrimination by permitting professors to express views that the state endorsed while prohibiting them from expressing views that the state legislature disfavored. He further distinguished the Stop W.O.K.E. law from laws, under Title VII and Title IX, which dealt with sex discrimination. The central distinction was that one sought to regulate speech while the other dealt with conduct.

The state’s stated desire to combat racism or sexism did not provide “a safe harbor in which to enact rank viewpoint-based restrictions on protected speech.” Florida “cannot do an end-run around the First Amendment by declaring which viewpoints are so repugnant to lawmakers that their mere utterance, on a single occasion, is per se severe or pervasive and prohibiting their expression under an antidiscrimination law.”

Walker further connected academic freedom to the marketplace of ideas and likened viewpoint discrimination to poison to a free society. In addressing vagueness claims under the Fourteenth Amendment, the court found that the language of the law was often confusing, sometimes employing double or triple negatives, and did not adequately distinguish between permitted and unpermitted speech or between conversation about a topic and indoctrination.

In an interesting twist, the court rejected claims of overbreadth. Since “the challenged provisions of (the new law) unconstitutionally discriminate on the basis of viewpoint” in violation of both the First and Fourteenth Amendments, they have “no legitimate sweep,” which is required before laws can be considered to be overly broad, Walker said. The court refused to stay the injunction pending an appeal.

In wrapping up the decision, Judge Walker likened the situation in Florida to the situation that had prompted Professor Charles Beard to resign as president of Columbia University when the government attempted to dismiss professors who did not support World War I.

Walker cited Justice Felix Frankfurter’s observing that professors are the “priests of our democracy” and, in another reference to Orwell’s "1984," charged that Florida was attempting to create “its own Ministry of Truth under the guise of the Individual Freedom Act, declaring which viewpoints shall be orthodox and which shall be verboten in its university classrooms.”

He further admonished that “both robust intellectual inquiry and democracy require light to thrive” and that “our professors are critical to a healthy democracy."

“If our ‘priests of democracy’ are not allowed to shed light on challenging ideas, then democracy will die in darkness.”

This article was published Nov. 22, 2022. John R. Vile is a professor of political science and dean of the Honors College at Middle Tennessee State University.