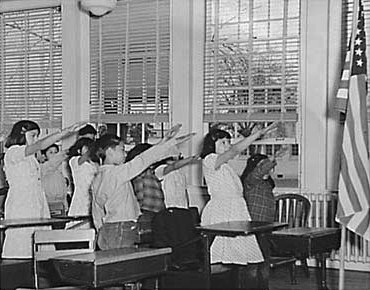 In this 1941 photo, American schoolchildren pledging allegiance to the flag in a former form of the salute, specifically the Bellamy salute. In West Virginia State Board of Education v. Barnette, the Supreme Court overturned a state law requiring a flag salute as an unconstitutional infringement on First Amendment freedoms that embody free speech and thought. (Image via Wikimedia, public domain)

In West Virginia State Board of Education v. Barnette, 319 U.S. 624 (1943), the Supreme Court invalidated a compulsory flag salute law in public schools and established that students possess some level of First Amendment rights.

The decision, which was issued on Flag Day, overturned Minersville School District v. Gobitis (1940) and struck down a West Virginia statute that imposed severe penalties on children and their parents if the children did not comply. The children faced expulsion and parents could be fined $50 and sent to jail for 30 days.

In Gobitis, two Jehovah’s Witness schoolchildren from Pennsylvania were expelled because they refused to comply with the school district’s policy that they salute the flag and recite the Pledge of Allegiance.

When the case reached the Supreme Court, the Court emphasized that the state had a strong interest in promoting “national cohesion” as “the basis of national security,” and that a mandatory flag salute was a constitutionally permissible manner of encouraging this by developing patriotism. Based on Gobitis (an 8-1 decision), West Virginia enacted the statute at issue in Barnette.

In Barnette, the Court emphasized that the issue in Gobitis had been whether the children in question could be excused from the flag salute because of their religious beliefs, whereas in Barnette the underlying question was whether “that power exists in the State to impose the flag salute discipline upon school children in general.”

As the Court noted, “the compulsory flag salute and pledge requires affirmation of a belief and an attitude of mind.” One year before Barnette was decided, Congress, too, had considered the propriety of requiring the flag salute and enacted a law officially recognizing the Pledge of Allegiance and also making the salute and statement of the pledge voluntary. This congressional action did not determine the outcome of Barnette but instead emphasized Congress’s view that compelling the flag salute was not necessarily the most effective way to develop and enhance patriotism.

Jackson: 'No official...can prescribe what shall be orthodox" in politics, religion or opinion

Justice Robert H. Jackson’s opinion in Barnette reexamined the purpose and function of public schools, noting that schools serve the essential role of “educating the young for citizenship.” With this in mind, the Court explained its intervention in Barnette as justified by the concern that “small and local authority may feel less a sense of responsibility to the Constitution, and agencies of publicity may be less vigilant in calling it to account.”

Public education, according to the Court, should “not strangle the free mind at its source [or] teach youth to discount important principles of our government as mere platitudes.” Instead, education should enable students to make informed choices about what to believe. The Court echoed the sentiments of Congress that patriotism does not become stronger because it is compulsory but rather when it is voluntarily chosen.

Jackson concluded: “If there is any fixed star in our constitutional constellation, it is that no official, high or petty, can prescribe what shall be orthodox in matters of politics, nationalism, religion, or other matters of opinion[,] or force citizens to confess by word their faith therein.”

Pledge of Allegiance controversy resurfaced in 2004

In 2004 the Pledge of Allegiance was again the focus of a Supreme Court case, but Elk Grove Unified School District v. Newdow raised an issue not present at the time of Barnette.

In Elk Grove, atheist father Michael Newdow claimed that the words “under God,” added to the pledge in 1954, constituted an unconstitutional establishment of religion in violation of the First and Fourteenth Amendments. The Court rejected Newdow’s appeal on the technicality that he lacked proper standing to bring the lawsuit because he was not the child’s custodial parent.