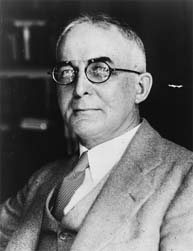 Canadian Douglas Clyde Macintosh was denied U.S. citizenship because he expressed reservations about serving the U.S. during wartime. The Supreme Court in United States v. Macintosh (1931) upheld the denial of citizenship. Four justices dissented, noting the long history of the United States in excusing conscientious objectors from military services as part of the religious freedom guaranteed in the First Amendment. (Image via Library of Congress)

Macintosh, who had served as a chaplain for the Canadian army in World War I, was chaplain of the Yale Graduate School and Dwight Professor of Theology at the time of his petition for citizenship.

In his naturalization application, Macintosh had expressed reservations about his future countrymen’s duty to defend the United States. He had qualified his acceptance of shouldering this duty by indicating that allegiance to God came before allegiance to a country.

Macintosh was not a pacifist per se; he simply wished to reserve to himself the right to make his own judgment, guided by his religious conscience, concerning the necessity of taking up arms. In effect, Macintosh was looking to the First Amendment’s freedom of religion guarantee to override the necessity to take up arms in defense of his country, should he see fit.

Supreme Court upholds denial of citizenship, noting it was a privilege

In his decision for the Court, Justice George Sutherland argued that naturalization was “a privilege, to be given, qualified or withheld as Congress may determine, and which the alien may claim as of right only upon compliance with the terms which Congress imposes.”

Sutherland thought the case was governed by the decision in United States v. Schwimmer (1929), in which the Court denied naturalization to a pacifist.

Sutherland observed that “we are a Nation with a duty to survive; a Nation whose Constitution contemplates war as well as peace; whose government must go forward upon the assumption, and safety can proceed upon no other, that unqualified allegiance to the Nation and submission and obedience to the laws of the land, as well those made for war as those made for peace, are not inconsistent with the will of God.” Since Macintosh could not give such allegiance, the district court’s denial of citizenship was correct.