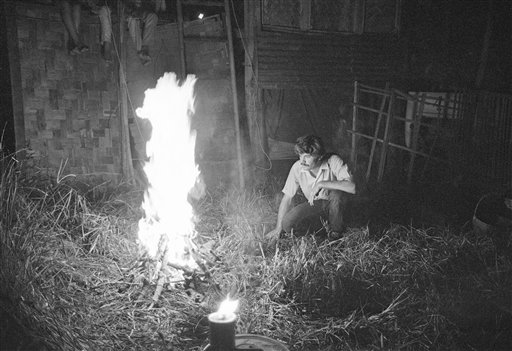 During the Vietnam War, the Supreme Court sought to define the meaning of religion under the First Amendment for the purposes of determining whether an individual could obtain a religious exemption from the military draft. In Welsh v. United States (1970), the Court determined that traditional religious beliefs were not necessary to claim conscientious objector status. In this photo, Mark Rankin, 23, of Berkeley, California, a conscientious objector, burns his boots in a boot-burning party in an old Laotian bamboo house in Vientiane, Laos in July 1968. (AP Photo/Eddie Adams, used with permission from the Associated Press)

In Welsh v. United States, 398 U.S. 333 (1970), the Supreme Court sought to define the meaning of religion under the First Amendment for the purposes of determining whether an individual could obtain a religious exemption from the military draft during the Vietnam War.

Welsh had applied for conscientious objector (CO) status, even though his objections stemmed from convictions born of a personal moral code rather than “religious” training and belief. The Court ruled 6-3 that his beliefs were sufficiently religious such that he was entitled to CO status.

Justice Hugo L. Black authored an opinion for four justices interpreting the Selective Service Act. Although Welsh had struck out the word religious in explaining his opposition to war, Black believed this focused unduly “on the registrant’s interpretation of his own beliefs.” Welsh held his beliefs “with the strength of more traditional religious convictions.”

Justice John Marshall Harlan II concurred, albeit on constitutional rather than statutory grounds. He argued that the Court was straining to reach the results that it did in this case. While believing that Congress had intended to restrain CO status to individuals whose convictions stemmed from religious beliefs, Harlan did not believe it had power to do so. Harlan did not think Congress could constitutionally limit CO status to those whose beliefs were religiously based without violating the establishment clause and the neutrality for which he thought it required. Religious and nonreligious CO’s should both be judged by “the intensity of [their] moral conviction.”

Justice Byron R. White authored a dissent joined by two other justices. He thought that Congress intended only to extend exemptions to those motivated by belief in God, and he thought the free exercise clause of the First Amendment granted it adequate authority to draw such a distinction.

The following year, the Court issued a decision in Gillette v. United States (1971), indicating that it was unwilling to further extend exemptions to individuals whose beliefs led them only to oppose certain wars.