By Timothy J. O'Neill
Related cases in Creationism / Intelligent Design and Separation of Church and State 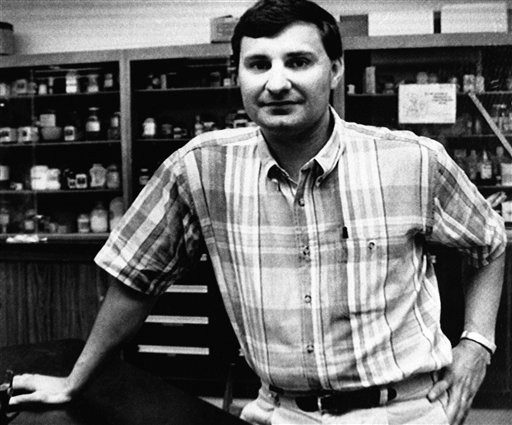 The United States Supreme Court ruled in Edwards v. Aguillard that Louisiana's creation-science law was in conflict with the constitutionally required separation of church and state. Donald Aguillard, shown in 1987, assistant principal of Acadiana High School in Scott, Louisiana, sued the state over the law in 1981. (AP Photo, used with permission from the Associated Press)

In Edwards v. Aguillard, 482 U.S. 578 (1987), the Supreme Court held that a Louisiana law mandating instruction in “creation science” whenever evolution was taught in public schools violated the establishment clause of the First Amendment. The 7-2 ruling did not outlaw the teaching of creation science; it held only that states could not require science teachers to teach it.

In the majority opinion of the Supreme Court, Justice William J. Brennan Jr. observed that the law served no clear secular purpose and promoted a particular religious belief, thus violating the establishment clause.

Brennan found the statute’s professed goal of protecting academic freedom deceptive because teachers were granted no more flexibility than they already had; the legislative history and the discriminatory preference for creation science over all other challenges to the theory of evolution revealed the real purpose of the law to be to promote a specific religious belief.

Law had no secular purpose

Moreover, the statute’s author repeatedly expressed his religious objections to evolution during legislative hearings. Brennan stressed that because attendance in public schools is mandatory, and schoolchildren are especially impressionable, the Court had to be especially vigilant when the schools become entangled with religious beliefs.

Applying the three-pronged test from Lemon v. Kurtzman (1971), used to determine if a law falls under the First Amendment’s prohibition of laws “respecting an establishment of religion,” Brennan found that the statute failed the “secular purpose” prong.

In a dissenting opinion, Justice Antonin Scalia accepted Louisiana’s assertion that its motives were not solely religious, finding a sincere secular purpose in its desire to foster a balanced understanding of the origins of life. Scalia then urged the Court to discard Lemon’s secular purpose test. It was futile, he argued, to try to determine subjective legislative intent given the multiple and often conflicting motivations behind a vote for any law.

The issue arose again, in Kitzmiller v. Dover Area School District (M.D. Pa. 2005), when a Pennsylvania school district required that a statement endorsing “intelligent design,” a form of creationism stripped of its religious references, be read to children in biology classes. A federal district judge held that the statement violated the establishment clause.