By John R. Vile
Related cases in Solicitation and Pamphleteering, Incorporation / Application of the Bill of Rights to the States, Jehovah's Witnesses and Free Speech 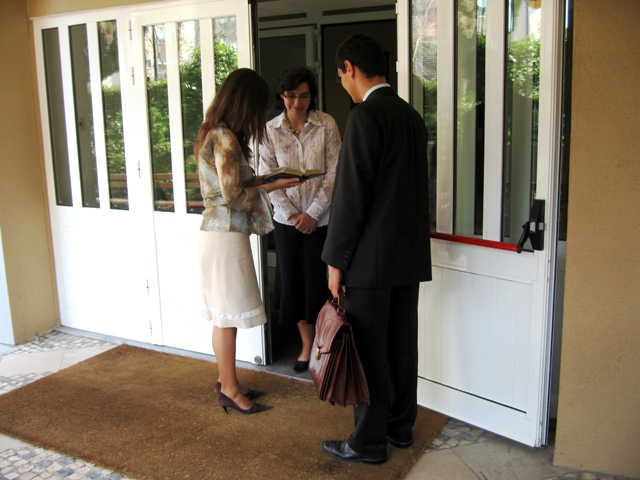 A 1940 Supreme Court decision in Cantwell v. Connecticut affirmed the religious freedom rights of a Jehovah's Witness man to go door-to-door and that the state's breach of peace law was too broad. (This 2007 photo shows typical preaching work of Jehovah's Witnesses, by Steelman via Wikimedia Commons, CC BY-S.A. 2.5)

Cantwell v. Connecticut, 310 U.S. 296 (1940) stands as the first case in which the Supreme Court applied First Amendment freedom of religion rights to the states via the due process clause of the Fourteenth Amendment.

Newton Cantwell, a Jehovah’s Witness, and his sons had canvassed individuals in New Haven, Connecticut, without first obtaining a permit.

The state charged Cantwell and his sons with a number of offenses including soliciting without a permit and inciting breach of the peace. Cantwell’s conviction of the latter charge stemmed from an incident in which he had approached two Roman Catholics and played a record denouncing their church.

The Court ruled in Cantwell’s favor.

Writing for a unanimous Supreme Court, Justice Owen Roberts observed that the First Amendment “embraces two concepts, — freedom to believe and freedom to act. . . . The first is absolute but, in the nature of things, the second cannot be. Conduct remains subject to regulation for the protection of society.”

In the case at hand, Roberts believed that requiring a permit to canvass constituted an unconstitutional prior restraint on publication. Acknowledging that the state had the right to safeguard “against the perpetration of frauds under the cloak of religion,” he believed the licensing requirement left too much discretion in the hands of the official who would determine whether to grant permission.

Roberts also believed the breach of the peace statute to be too broad, finding no evidence that Cantwell’s actions constituted a “clear and present danger of riot, disorder, interference with traffic upon the public streets, or other immediate threat to public safety, peace, or order.”

Although the individuals to whom Cantwell had played his recordings had found them to be offensive, Cantwell promptly moved on when asked to do so, and his language did not consist of “profane, indecent, or abusive remarks directed to the person of the hearer”; there was “no assault or threatening of bodily harm, no truculent bearing, no intentional discourtesy, no personal abuse.”

Roberts observed sharp differences respecting religious and political faith, but that “the people of this nation have ordained in the light of history, that, in spite of the probability of excesses and abuses, these liberties are, in the long view, essential to enlightened opinion and right conduct on the part of the citizens of a democracy.”

Cantwell is a landmark case because it