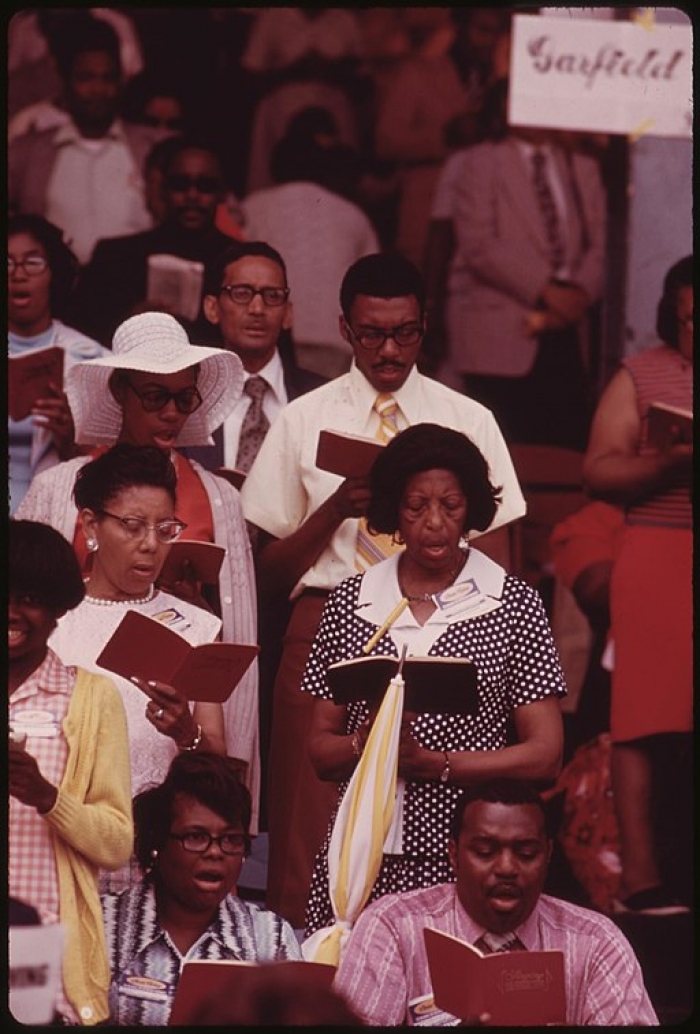 The Supreme Court in 1938 invalidated the conviction of a Jehovah's Witness who sold a religious pamphlet and magazine in violation of a local ordinance requiring prior permission from the city manager. The Court said the ordinance violated the First Amendment's freedom of the press. In this 1973 public domain photograph, Jehovah's Witnesses gather during outdoor worship services in Chicago.

Although the Court had rejected an almost identical claim in a short per curiam opinion the previous year in Coleman v. Griffin (1937), this relatively early decision in Lovell v. City of Griffin, 303 U.S. 444 (1938), overturned the conviction of a Jehovah’s Witness who had gone door to door selling pamphlets and magazines.

While affirming that First Amendment rights applied to the states via the Fourteenth Amendment, this case focused almost exclusively on freedom of the press.

Alma Lovell, a member of the Jehovah’s Witnesses, had been convicted in the Recorder’s Court for the city of Griffin, Georgia, for selling a pamphlet and a magazine in violation of the city’s ordinance prohibiting the distribution of any kinds of literature without the prior permission of the city manager. The Georgia Superior Court, its court of appeals, and its supreme court had all refused to review the decision.

Writing for the Court, Chief Justice Charles Evans Hughes wrote that the ordinance was “invalid on its face” because “it strikes at the very foundation of the freedom of the press by subjecting it to license and censorship.”

The license requirement served as an unconstitutional “prior restraint,” which defenders of the press from John Milton forward had condemned. Pamphlets and leaflets, like newspapers and periodicals, were included within the freedom of the press protected by the First and Fourteenth Amendments. This freedom protected “distribution” as well as “publication” of such materials.

After retreating from this decision in the case of Jones v. City of Opelika (1942), the Supreme Court returned to it in Murdock v. Pennsylvania (1943) and Jones v. City of Opelika II (1943). Each case involved Jehovah’s Witnesses. In the latter cases, the Court rested its decisions not only on freedom of the press but also on freedom of speech and free exercise of religion.

Justice Benjamin N. Cardozo did not participate in the decision for Lovell v. City of Griffin.