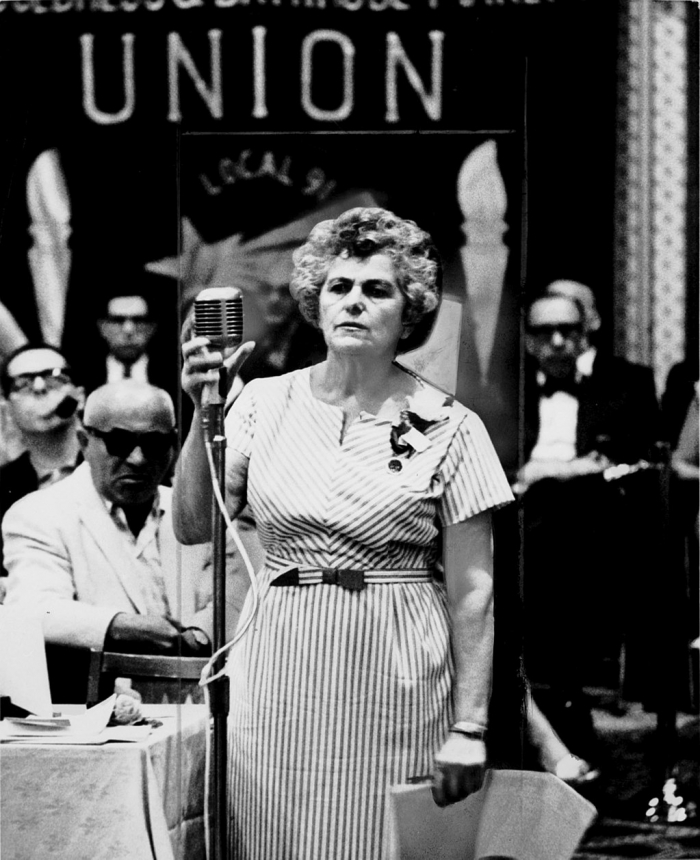 An employee of the International Ladies' Garment Workers' Union (ILGWU) was convicted in Georgia for not getting a permit from the mayor and city council before she met with residents in their homes to encourage them to join her organization. On appeal to the Supreme Court, the Georgia town's permit law was ruled as a violation of the First Amendment's guarantee of free speech. In this 1965 photo, Rose Pesotta addresses the floor at the ILGWU convention. (Image via the The Kheel Center for Labor-Management Documentation and Archives, CC BY 2.0)

In its 7-2 decision in Staub v. City of Baxley, 355 U.S. 313 (1958), the Supreme Court voided an ordinance in Baxley, Georgia, that required individuals soliciting members for any dues-collecting organization to obtain a permit from the mayor and city council.

The ordinance allowed the officials to deny the permit if they thought the organization was deleterious to the general welfare of the citizens.

In a decision affirmed by higher state courts, the Mayor’s Court had convicted Rose Staub, an employee of the International Ladies’ Garment Workers’ Union, of not applying for a permit before meeting with residents in their homes to encourage them to join her organization. Staub argued that the license fee was discriminatory and unreasonable and violated First Amendment freedoms of speech, press, and lawful assembly.

In his decision for the Court, Justice Charles Evans Whittaker focused on two issues.

First, he denied that the state court of appeals, which had refused Staub standing because she had not applied for the permit and further insisted that she had to attack specific sections of the law rather than the law as a whole, had offered adequate procedural grounds for rejecting the case.

Second, and more important, he ruled that the law was “invalid on its face” because the license requirement “makes enjoyment of the constitutionally guaranteed freedom of speech contingent upon the will of the Mayor and Council of the City and thereby constitutes a prior restraint upon, and abridges, that freedom.”

In a dissent joined by Justice Tom C. Clark, Justice Felix Frankfurter focused on federalism concerns. He believed state courts were entitled to deference on issues related to the proper standing of parties and whether they had to challenge a law in part or in whole.

This case is one of several in which the Court has rejected licensing requirements that vest discretion in the licensing authority.