Church of the Lukumi Babalu Aye v. City of Hialeah (1993) 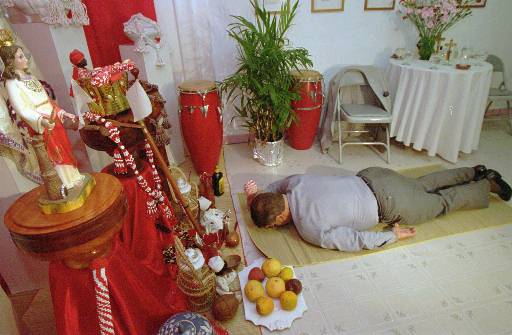 An unidentified person says a prayer to Chango, a chief Santeria deity, at a church in Hialeah, Fla., Sept. 28, 1995. Santeros numbers an estimated 100,000 in South Florida and 1 million nationwide. The Supreme Court determined the Hialeah city government had unconstitutionally targeted the Santerians by their animal sacrifice services. (AP Photo/Rick Bowmer, reprinted with permission from The Associated Press.)

In Church of the Lukumi Babalu Aye v. City of Hialeah, 508 U.S. 520 (1993), the Supreme Court affirmed the principle that laws targeting specific religions violate the free exercise clause of the First Amendment.

The Church of the Lukumi Babalu Aye practices Santeria, a fusion of traditional African religions and Roman Catholicism.

After the church announced plans to establish a house of worship in Hialeah, Florida, the city council enacted four ordinances prohibiting the ritual sacrifice of animals, a ceremony Santerians perform to express devotion to their spirits.

The church filed suit, and a federal district court ruled for the city. The Eleventh Circuit Court of Appeals affirmed.

The Supreme Court unanimously reversed the Eleventh Circuit, holding that the city had targeted and sought to suppress a religious practice in violation of the free exercise clause.

In the opinion for the Court, Justice Anthony M. Kennedy cited the two-part test articulated in Employment Division, Department of Human Resources of Oregon v. Smith (1990): The government may burden religious practice if a law is neutral and generally applicable.

Applying the first element of the Smith test, Kennedy declared that Hialeah’s ordinances were not neutral; rather, the record revealed that the city council had sought to suppress the Santerians’ ritual sacrifice of animals.

The ordinances granted exceptions for slaughterhouses, and they did not require the inspection of fish or game caught by hunters, the control of food disposed of by restaurants, or prohibit the killing of animals for nonreligious reasons, including the catching of fish and the extermination of mice and rats.

Court said law did not serve a compelling government interest

A law that fails the Smith test must be justified by a compelling governmental interest and be narrowly tailored to achieve that interest. Kennedy held that the Hialeah ordinances were not compelling, because they were underinclusive with respect to animal and public health interests.

They also were not narrowly tailored to serve those interests, because they were either overbroad or underinclusive.

In a concurrence, Justice David H. Souter expressed his disagreement with the use of the Smith test.

He argued that the Court should reexamine Smith, because it was atypical of the Court’s free exercise jurisprudence and because Smith, having left prior cases undisturbed, also left unresolved the issue of which constitutional rule to follow in deciding free exercise cases.

Justice Harry A. Blackmun concurred with Souter that Smith was wrongly decided and that the Hialeah ordinances violated the free exercise clause, because laws that target religion are not tailored to serve a compelling governmental interest.

This article was originally published in 2009. Dr. William C. Green (1954-2020) was a professor of political science and government at Morehead State University.