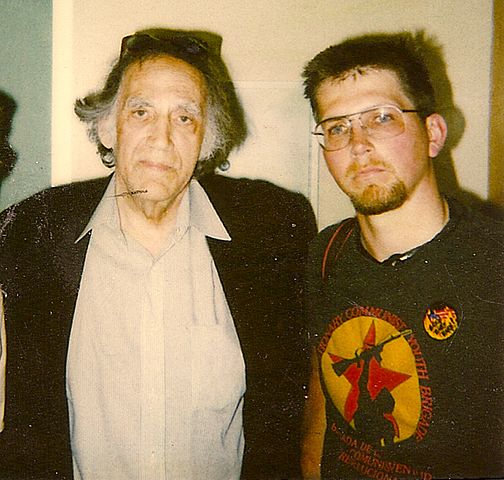 Gregory Lee Johnson, right, with his attorney circa 1989. Johnson was convicted under a Texas law for burning an American flag. The Supreme Court overturned the law in Texas v. Johnson for violating First Amendment freedom of expression. (Image via Wikimedia Commons, CC BY-SA 3.0)

In Texas v. Johnson, 491 U.S. 397 (1989), the Supreme Court struck down on First Amendment grounds a Texas flag desecration law. The 5-4 decision has served as the center point of a continuing debate regarding the value of free speech as exercised through the burning of the U.S. flag as a form of political protest.

During the 1984 Republican National Convention in Dallas, Gregory Lee Johnson participated in protests against the Reagan administration’s policies and the nomination of President Ronald Reagan for a second term. Culminating the protests, Johnson doused a U.S. flag with kerosene and set it on fire. After the flag was burned, a witness gathered the flag’s remains to bury them.

Of the 100 demonstrators gathered, only Johnson was charged with violating a Texas state law, which made desecrating the national flag a criminal offense. Johnson was convicted, but the Texas Court of Criminal Appeals overturned his conviction. Texas then appealed to the Supreme Court.

Writing for the majority, Justice William J. Brennan Jr. noted that expressive conduct is protected by the First Amendment, and that the government’s interests in protecting the flag did not trump the right to engage in political speech. Texas argued that the state was seeking to prevent breaches of the peace and to preserve the flag as “a symbol of nationhood and national unity,” but the Court rejected the application of the “fighting words” doctrine and the governmental interest in protecting a symbol. Brennan argued that it “would be odd . . . that the government may ban the expression of certain disagreeable ideas on the unsupported presumption that their very disagreeableness will provoke violence.” Brennan held that Johnson was charged and convicted for “his expression of dissatisfaction with the policies of this country, expression situated at the core of our First Amendment values.”

Dissenters focused on the value of the flag

In his dissent, Chief Justice William H. Rehnquist, after providing a lengthy history of the role of the U.S. flag in American life, held that the burning of the flag is akin to “fighting words.” In his dissent, Justice John Paul Stevens, a World War II veteran, was troubled by the possible devaluing of the flag’s symbolic nature. Noting that if a federal right to post bulletin boards and graffiti to “enlarge the market for free expression” meant defacing the Washington Monument, Stevens would not allow it; thus, he reasoned, “sanctioning the public desecration of the flag will tarnish its value.”

The Supreme Court reaffirmed Texas v. Johnson a year later in United States v. Eichman (1990), when it struck down the Flag Protection Act of 1989, which Congress enacted in response to the 1989 decision. Since this ruling, the issue of flag burning has been a repeated target of congressional attempts to overturn the Court’s decision via constitutional amendment. In summer 2006, the Senate fell a single vote shy of the 67 votes needed to propose the amendment to the states.

This article was originally published in 2009. J. Michael Bitzer is a Professor of Politics and History at Catawba College in North Carolina.