By Heidi Kitrosser
Related cases in Flag (Treatment of) 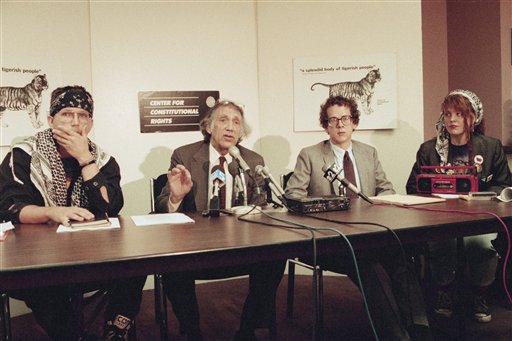 William Kunstler second from left, discusses the Supreme Court ruling to declare the Flag Protection Act of 1989 unconstitutional at a press conference Monday, June 11, 1990 in New York. Kunstler and David Cole, second from right, represented Shawn Eichman, right, a defendant in the case, and Joey Johnson, a defendant in a similar case in 1989. (AP Photo/Marty Lederhandler, used with permission from The Associated Press.)

In Johnson the Court had deemed unconstitutional a Texas statute that prohibited the desecration of “venerated object[s],” including flags.

Desecrate was defined as “physically mistreat[ing] in a way that the actor knows will seriously offend” others. The Court wrote that because the Texas statute targeted expressive content it could not be analyzed under the deferential level of review accorded regulations of conduct that impact expression incidentally. A statutory purpose to preserve the flag’s symbolic value was acknowledged.

Furthermore, the statute targeted expressions’ “communicative impact” by punishing only desecration likely to offend others. The Court went on to emphasize that the government could not circumvent the First Amendment by prohibiting only certain modes of expression, such as flag-burning, as opposed to prohibiting all means of expressing certain messages.

The U.S. Congress responded to the Johnson ruling by passing the Flag Protection Act of 1989, which authorized the criminal conviction of anyone who “knowingly mutilates, defaces, physically defiles, burns, maintains on the floor or on the ground, or tramples upon any flag of the United States.”

The act exempted “any conduct consisting of the disposal of the flag when it has become worn or soiled.” Congress hoped that the omission of an explicit offensiveness component from the act’s text would lead courts to deem it neutral as to expressive content. Indeed, the act replaced an earlier federal statute prohibiting the casting of “contempt” upon the flag.

Nonetheless, in Eichman the Court found the Flag Protection Act of 1989 to be impermissibly content-based.

Relying on the government’s characterization of its interests and on a textual analysis of the prohibited means of flag destruction, the Court found that “[t]he Government’s interest . . . rests upon a perceived need to preserve the flag’s status as a symbol of our Nation and certain national ideals.” Having deemed the act content-based, the Court held that it could not survive strict judicial scrutiny.

As in Johnson, the interests asserted in support of the statute were deemed impermissible. Justice Brennan again wrote the opinion of the Court and again was joined by Justices Marshall, Blackmun, Scalia, and Kennedy.

Also as in Johnson, Chief Justice Rehnquist, and Justices White, O’Connor, and Stevens dissented, echoing the points made in their Johnson dissents.