By Ronald Steiner
Other articles in General Legal Concepts and Theories 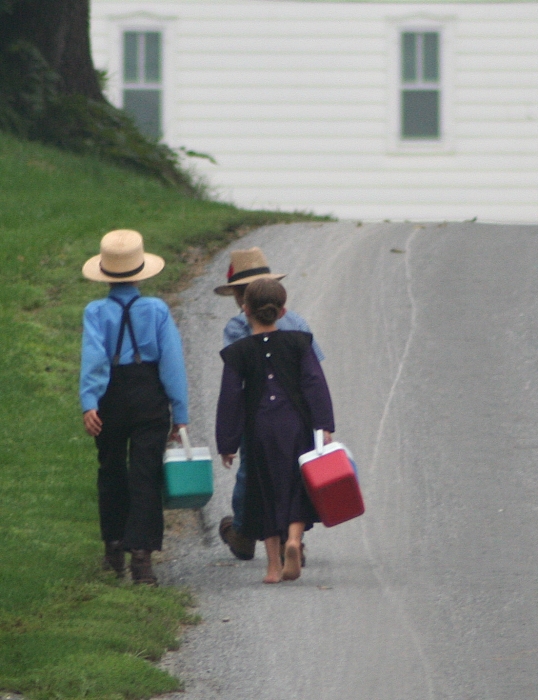 A government regulation that impairs First Amendment rights must meet a higher standard of need, called a "compelling government interest," to be constitutional. Regulation vital to the protection of public health and safety, including the regulation of violent crime, the requirements of national security and military necessity are examples of compelling governmental interests. But courts have decided other regulations go too far. For example, in Wisconsin v. Yoder (1972), the Court allowed Amish parents to withdraw their children from school at age fourteen, despite a state law requiring attendance until sixteen, because the additional two years of education was not a compelling enough interest to burden the practice of religion. (Photo of Amish schoolchildren in 2006 by via Wikimedia Commons, CC by 2.0)

A compelling state (or governmental) interest is an element of the strict scrutiny test by which courts exercise judicial review of legislative and executive branch enactments that affect constitutional rights, such as those found in the First Amendment.

An interest is compelling when it is essential or necessary rather than a matter of choice, preference, or discretion.

The levels of scrutiny determine how courts prioritize competing interests of individual and governmental claimants.

Prior to the mid-twentieth century, courts gave great deference to acts passed or issued by the legislative and executive branches.

In time, the patent unworkability of this pretense led justices, including Harlan Fiske Stone, to articulate an overt double (and later triple) standard for constitutional reviews: Most governmental regulation, including most economic regulation, would be presumed constitutional, but — as Stone explained in his famous footnote four in United States v. Carolene Products Company (1944) — regulation aimed at fundamental rights, the operation of the political process, and disadvantaged minorities must be viewed with more scrutiny and subjected to stricter review.

Under rational basis review, the most common and lowest level of scrutiny, a court asks only whether a governmental regulation might serve some “legitimate” governmental interest.

Under intermediate scrutiny, applied to such issues as content-neutral regulation of speech — the court requires that the government show that the regulation serves an “important” interest.

Strict scrutiny, however, requires the government to demonstrate that it is using the most narrowly tailored, or least restrictive, means to achieve an interest that is compelling. Although not explicitly defined, “compelling” is obviously intended to be a higher interest than “legitimate” or “important”; some have described it as “necessary” or “crucial,” meaning more than an exercise of discretion or preference.

Regulation vital to the protection of public health and safety, including the regulation of violent crime, the requirements of national security and military necessity, and respect for fundamental rights are examples of compelling governmental interests.

In Widmar v. Vincent (1981) and Locke v. Davey (2004), the Court held that a compelling interest exists in complying with constitutional obligations, such as not violating the establishment clause. So, for example, any attempt to regulate expression based on its content will require a showing of a compelling governmental interest, particularly where the speech occurs in a public forum or on public property traditionally available for expressive and associative activities.

In the context of the free exercise of religion, the Court ruled in Sherbert v. Verner (1963) that legitimate concerns about administrative difficulties, such as uncovering fraudulent unemployment claims, are insufficient to limit free exercise rights.

In Wisconsin v. Yoder (1972), the Court allowed Amish parents to withdraw their children from school at age fourteen, despite a state law requiring attendance until sixteen, because the additional two years of education was not a compelling enough interest to burden the practice of religion.

In Employment Division, Department of Human Resources of Oregon v. Smith (1990), however, the Court held that a law of general effect — that is, one that does not reflect discriminatory intent against a particular religion — is not subject to strict scrutiny, even if it burdens a religious practice.

In response to Smith, Congress by statute demanded strict scrutiny and a showing of a compelling interest for infringements of free exercise. The Religious Freedom Restoration Act of 1993 (RFRA) reestablished a compelling interest requirement for bona fide free exercise claims against federal regulation, but the Court ruled in City of Boerne v. Flores (1997) that this attempt to reapply the compelling state interest test to states violated the Fourteenth Amendment. Many states have enacted their own RFRA requirements as a matter of state law.

In Buckley v. Valeo (1976) and McConnell v. Federal Election Commission (2003), the Court ruled that there is a compelling interest in reducing the appearance of political corruption sufficient to sustain extensive regulation of finance and expression in campaigns and elections, as long as content is not targeted and avenues for exercising political speech are not excessively restricted.

This article was originally published in 2009. Ronald Steiner (Ph.D. Political Science, University of Minnesota; J.D., University of Southern California) is Professor and Director of Graduate Legal Education at the Fowler School of Law at Chapman University, where he teaches constitutional law and other topics in law and political science.