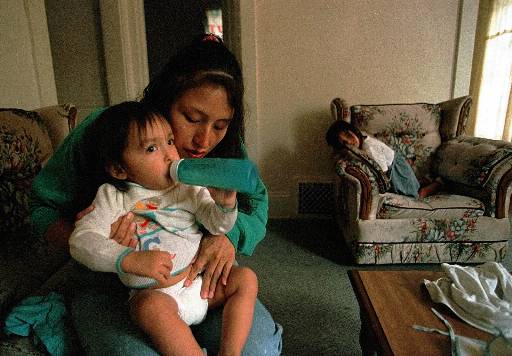 Congress did not want money it contributed for indigent legal services to be used to challenge the welfare law, but the Supreme Court said in Legal Services Corp. vs. Velazquez that the regulation of attorney speech in representing their client went too far and violated the First Amendment. In this photo, a mother on welfare feeds her baby. (AP Photo/Morry Gash, used with permission from the Associated Press)

The Court ruled that a provision — the Omnibus Consolidated Rescissions and Appropriations Act of 1996 — violated the First Amendment’s free speech clause because it was a viewpoint-based regulation of private speech, it interfered with the traditional role of lawyers, and it restricted the access of indigent persons to the resources of the legal system.

The Omnibus Consolidated Rescissions and Appropriations Act prohibited any grantee from using LSC funds to represent clients in cases that challenged the constitutionality of, or sought to change, existing welfare law.

The LSC challenged the restriction as an unconstitutional viewpoint-based restriction on free speech. A federal district court rejected the group’s challenge, but a three-judge panel of the U.S. Court of Appeals for the Second Circuit ruled in LSC’s favor.

On appeal, the Supreme Court held 5-4 that the restriction violated the First Amendment.

The Court distinguished the case from Rust v. Sullivan (1991), in which it upheld a regulation limiting the provision of federal family planning funds to facilities that did not provide or discuss abortion-related services.

Subsequent cases have clarified that Rust stands for the principle that the government may impose speech restrictions on private organizations that receive government funds, intended to convey a certain message, as long as the restrictions serve to clarify the content of this message. This helps to ensure that the public is not misinformed about elected representatives’ policies.

In Velazquez (who was the respondent), the Court concluded, restrictions were not being placed on governmental speech.

Writing for the Court, Justice Anthony M. Kennedy said that the LSC program was “designed to facilitate private speech” because when a lawyer is representing his or her client(s), he or she is not “the government’s speaker.”

Rule could interfere with attorney's role to properly represent client

The majority found a prohibition aimed at the private speech of the legal profession to be troublesome for two reasons.

First, it “distorts the legal system by altering the traditional role of the attorneys.” By restricting their ability to raise challenges to statutes during the course of litigation, the law prevented LSC-funded attorneys from raising “all the reasonable and well-grounded arguments” necessary to represent their clients properly.

Second, the 1996 law’s restriction on speech presented a fundamental challenge to the separation of government powers. It required any LSC-funded attorney to withdraw from ongoing litigation, at any stage, if the litigation raised a question about the validity of welfare law.

This, the Court observed, had the effect of “insulat[ing] the Government’s laws from judicial inquiry,” a consequence inconsistent with Chief Justice John Marshall’s famous statement in Marbury v. Madison (1803) that “[i]t is emphatically the province and the duty of the judicial department to say what the law is.”

In the dissent, Justice Antonin Scalia wrote that the case was not distinguishable from Rust. He also did not see as realistic the concern, identified by the Court, that the 1996 prohibition was especially burdensome for indigent litigants because they were less likely than other clients to be able to find legal representation other than that funded by the LSC.

Although Velazquez was concerned with protecting the speech of legal aid attorneys, where to draw the line between private and government speech remains a contentious issue in controversial areas such as abortion regulation.

This article was originally published in 2009. Dr. Knowles is an Associate Professor of Political Science at the State University of New York at Oswego. She has written extensively about American law, jurisprudence, and legal history. Her publications include two books about the First Amendment: Judging Free Speech: First Amendment Jurisprudence of US Supreme Court Justices (Palgrave Macmillan 2015) (co-edited with Steven B. Lichtman); and Free Speech Theory: Understanding the Controversies (Peter Lang, 2020) (co-edited with Brandon T. Metroka).