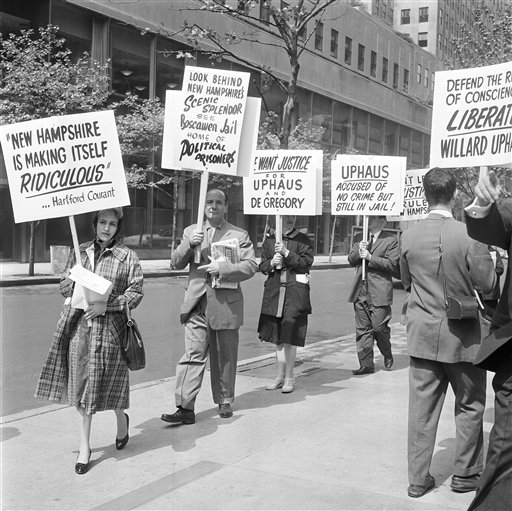 Methodist pacifist minister Willard Uphaus was jailed for refusing to reveal the names of speakers at a camp conference as part of a New Hampshire state investigation into subversive activities, leading to Supreme Court decisions in 1959 and 1960 that upheld the contempt conviction by the court and rejected a First Amendment challenge based on rights of privacy and freedom of association. In this photo, picketers protest Uphaus' imprisonment during the opening of a New Hampshire tourist bureau in New York’s Rockefeller Center May 10, 1960  (AP Photo/Anthony Camerano, used with permission from The Associated Press.)

In Uphaus v. Wyman, 360 U.S. 72 (1959) and 364 U.S. 388 (1960), the Supreme Court upheld the state court’s decision to hold a minister in contempt for refusing to provide information regarding subversive activities at a summer camp that might threaten the security of the state.

The Court found the conviction was not an invasion of privacy or a denial of free speech or association guaranteed by the First Amendment. Also, the Court found that the due process of the Fourteenth Amendment does not preclude the state from compelling the provision of the names.

The cases involved attempts by the attorney general of New Hampshire to get Dr. Willard Uphaus, a pacifist Methodist minister, to turn over correspondence he had with individuals who came to speak to a World Fellowship Camp he had sponsored and a list of individuals who attended the camp during 1954 to 1955.

Uphaus refused, stating that forcing him to produce the information violated his First Amendment rights. State courts had found him in contempt and sentenced him to up to one year in prison or until such time as he produced the information.

In the first case, the Supreme Court, in a decision written by Justice Tom C. Clark, upheld the contempt citation against charges that state investigations of subversion had been preempted by the Smith Act and that the attorney general’s authorization was too vague, irrelevant, or in violation of First Amendment rights or free speech and association.

Clark minimized problems connected with “guilt by association” by observing that the state was not engaged in a criminal prosecution. He justified the state’s inquiry into subversive activities as a means to its self-preservation, which “outweighs individual rights in an associational privacy.”

In a dissent joined by Chief Justice Earl Warren and Justices Hugo L. Black and William O. Douglas, William J. Brennan Jr. argued that this was a clear case of “exposure purely for the sake of exposure.” He thought that the decision in NAACP v. Alabama (1958), relative to freedom of association, should govern in this case.

The issue reappeared in 1960, after the state of New Hampshire amended its law to limit investigations by the attorney general to violations of the law rather than to subversive activities. After the New Hampshire Supreme Court again upheld the contempt charge, the Court majority issued a per curiam opinion, saying that it was bound by the state’s construction of its own laws and that the case did not present “a substantial federal question.” Brennan felt bound by the earlier decision, although he had not supported it.

Justice Black again wrote a dissent, joined by Warren and Douglas, noting that he did not believe the public interests could overbalance that of Uphaus, especially with the subversion omission. He further believed that the state’s treatment of him amounted to a prohibited bill of attainder, prohibited by Article 1, section 10 of the U.S. Constitution. Black traced the majority decision to its decision to “reduce the absolute commands of the Constitution to mere admonitions.”

He compared the technique of putting individuals in the position of either exposing their friends or going to prison to the English trials of John Udall in 1590 and John Bunyan (the author of Pilgrim’s Progress) some 70 years later. Black observed that the Bill of Rights was designed to protect people from “nothing more than charges that they associate with others labeled by the Government as publicans and sinners.”

Justice Douglas thought the earlier decision could no longer stand in light of changes in the law.