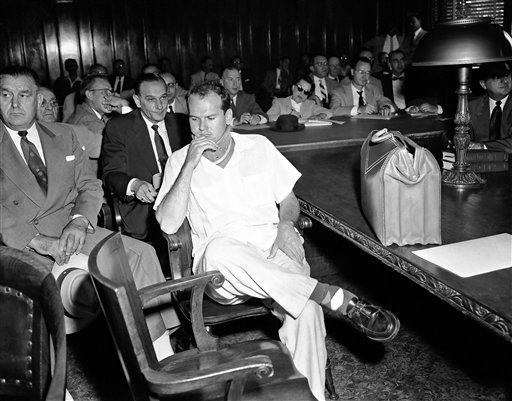 Dr. Samuel H. Sheppard, 30-year-old osteopath charged with the slaying of his wife, Marilyn, is shown here in the courtroom during his 1954 trial. He was convicted of murder, but the Supreme Court overturned that decision saying Sheppard had been denied a fair trial and the trial judge should have adopted stricter courtroom rules for the news media. The case serves as an example of when freedom of the press is pitted against the right to a fair trial, and how the courts might use concerns about fair trial to limit the press. (AP Photo, reprinted here with permission from The Associated Press.)

The case Sheppard v. Maxwell, 384 U.S. 333 (1966), epitomized how a circus-like “media” trial can pit freedom of the press against the right to a fair trial and how the Supreme Court can use concerns about the latter to put reasonable limits on the former.

Early on July 4, 1954, in a Cleveland suburb, Marilyn Sheppard, pregnant wife of an osteopath and prominent socialite, was beaten to death. Her husband, Sam Sheppard, first called the mayor, a family friend, to report the crime. He claimed to have struggled with an intruder who knocked him out. The police saw no signs of breaking and entering. It was discovered that Sheppard had been having an affair.

The three-day coroner’s inquest was biased against the doctor, and the Cleveland press goaded the prosecutors to charge Sheppard. One newspaper ran 399 stories in six months.

The case came to trial two weeks before the November election. The chief prosecutor was a candidate for municipal judge, and the presiding judge was a candidate for reelection. Judge Edward J. Blythin allowed free rein for the media. This included publication of the addresses of the witnesses, photographs of all 12 jurors, prominent seating in the courtroom for the press, and radio and television broadcasts from the courthouse.

Radio and press pundits aired all sorts of gossip as if it were credible evidence. The judge told one columnist that Sheppard was “guilty as hell.” Even as they deliberated, jurors were allowed to phone their friends. Yet despite an inept and lackadaisical defense attorney, the jury required 30 ballots before convicting Sheppard.

Ruling that prejudicial publicity had denied him a fair trial, in an 8-1 vote the Court upheld a decision by a federal district court that granted Sheppard a writ of habeas corpus.

Justice Tom C. Clark wrote the majority decision. “Bearing in mind the massive pretrial publicity, the [trial] judge should have adopted stricter rules governing the use of the courtroom by newsmen.”

In 1966, Sheppard was acquitted in a retrial. The well-known defense attorney F. Lee Bailey represented Sheppard, and the judge limited the number of newsmen allowed in the courtroom and strictly banned interviews with any of the participants.

A dentist testified that there was no way Sheppard could have broken his own four teeth; a doctor said that he had treated Sheppard for a broken neck that could not have been self-inflicted. Despite 12 years of protesting his innocence, Sheppard did not take the stand in his own defense.

The case inspired the TV series (and later a movie) The Fugitive. Sheppard’s defenders, including his son, later offered candidates they viewed as the likely perpetrators of the crime. After Sheppard’s death, they asked prosecutors to reopen the investigation. New DNA tests proved inconclusive in resolving Sheppard’s guilt or innocence .