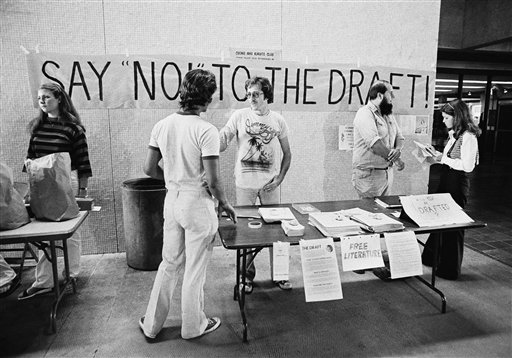 Members of the the American Friends Service Committee were involved in peace and anti-war movements,  as depicted here at a Florida community college in 1979 where they were handing out anti-draft material. In 1972, a member of the group won a First Amendment case after he was banned from distributing leaflets on a military base about a meeting on the Vietnam War. The Court said in Flower v. United States that the base commander had not restricted general access to the base and therefore could not order John Thomas Flower to stop leafleting. (AP Photo/Willens, used with permission from the Associated Press)

In a per curiam decision in Flower v. United States, 407 U.S. 197 (1972), rendered without oral arguments, the Supreme Court overturned the conviction of John Thomas Flower of the American Friends Service Committee on First Amendment grounds for distributing leaflets at Fort Sam Houston after officials had barred him from the base. Flower had been advertising a "Town Meeting on the Vietnam War." The American Friends Service Committee was known for their antiwar stance.

The majority reversed the conviction on the grounds that the base commander had not restricted general access to the base, and that there was no sentry or guard post on the busy street that passed through it: “Under the circumstances the military has abandoned any claim that it has special interests in who walks, talks, or distributes leaflets on the avenue. The base commandant can no more order petitioner off this public street because he was distributing leaflets than could the city police order any leafleteer off any public street,” reasoned the Court, citing Lovell v. City of Griffin (1938) and Schneider v. State (1939).

Dissenters said that the base could control leafleting

The case contained a brief notation of Justice Harry A. Blackmun’s dissent on the basis that he would hear arguments on the merits.

Justice William H. Rehnquist wrote a longer dissent in which Chief Justice Warren E. Burger joined. Rehnquist pointed out that the commander could not have subjectively intended to open his base to leafleting because he had already warned Flower against so doing. Rehnquist further doubted that opening a base to traffic necessarily opened it up to leafleting as well.

He observed that Adderley v. Florida (1966) had allowed even civilian authorities to “draw reasonable distinctions based on the purpose for which public buildings and grounds are used, in according the right to exercise First Amendment freedoms in such buildings and on such grounds.”

Rehnquist opposed presenting commanders with the “Hobson’s choice” of accommodating residents of the base only by giving up control over such activities.