By Roy B. Flemming
Related cases in Obscenity and Pornography 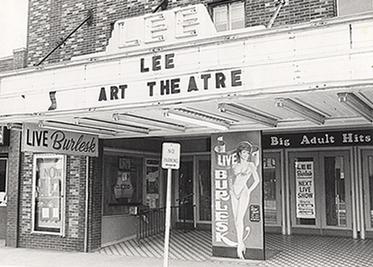 The Supreme Court overturned a obscenity conviction of the owner of Lee Art Theater, saying that the warrant to seize obscene films from the theater based on a police officer's personal observations about what was obscene was unconstitutional. (Photo of Lee Art Theater in Richmond, Virginia, via Wikimedia, fair use)

The Supreme Court’s per curiam reversal in Lee Art Theatre v. Virginia, 392 U.S. 636 (1968), extended greater protection to written materials by ruling that a warrant to seize obscene material based on a police officer’s personal observations is not constitutional, lacking judicial inquiry into the factual basis of the officer’s assertions.

The Lee Theatre opened as a neighborhood movie house in Richmond, Virginia in 1935, but declining box office receipts in the 1960s prompted the owner to switch to adult films and live nude dancers.

The films, declared to be obscene, led to the conviction of the theater’s operator. The Supreme Court of Appeals of Virginia denied a writ of error.

The Supreme Court reversed the conviction, finding that a single officer’s “conclusory assertions,” without further judicial scrutiny, was not a procedure “designed to focus searchingly on the question of obscenity” and did not meet constitutional requirements for necessary sensitivity to freedom of expression.

The Court cited Marcus v. Search Warrant (1961) as its authority.

Other justices said the films were not obscene

Instead of focusing on the case’s procedural question, however, Justices Hugo L. Black, William O. Douglas, and Potter Stewart, while concurring with the Court’s judgment, declared the films were not obscene according to Redrup v. New York (1967).

Redrup suggested that sexually explicit communication not involving juveniles, obtrusive distribution or displays making exposure difficult to avoid, or indications of “pandering” were protected under the First Amendment. The films seized at the Lee Art Theatre did not meet any of these criteria.

Lee Art Theatre raised the issue as to whether an adversarial hearing prior to the seizure of obscene material was required. Five years later, a more conservative Supreme Court ruled in Heller v. New York (1973) that such hearings were unnecessary.

This article was originally published in 2009. Roy B. Flemming is a Professor Emeritus in the Department of Political Science at Texas A&M University.