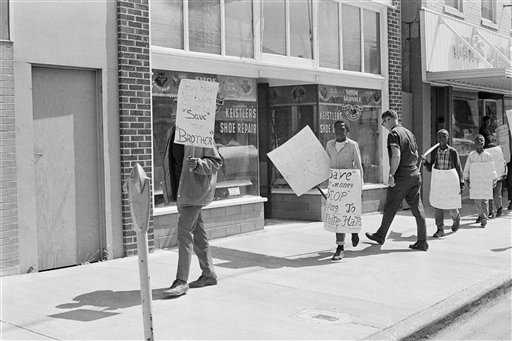 Young blacks picket in support of a boycott of white merchants in Cairo, Illinois on May 2, 1969. A protest in 1972 in Rockford, Illinois, led to the court case Grayned v. City of Rockford (1972), in which the court ruled that Rockford's anti-picketing law was too broad, but their anti-noise ordinance was constitutional. (AP Photo/Fred Jewell, used with permission from the Associated Press.)

In Grayned v. City of Rockford, 408 U.S. 104 (1972), the Supreme Court ruled that a city’s anti-picketing ordinance was overbroad and violated the Fourteenth Amendment’s equal protection clause. However, the Court upheld the anti-noise ordinance, finding that it was narrowly tailored to meet the city’s compelling interest in having undisrupted schools. Therefore, the anti-noise ordinance did not violate First and Fourteenth Amendment protections of freedom of speech.

The case addressed the constitutionality of two ordinances. One prohibited picketing within 100 feet of a school, except for peaceful picketing of any school involved in a labor dispute. Another prohibited a person, while on grounds adjacent to a school in session, from willfully making a noise or diversion that disturbs or tends to disturb the peace or good order of the school session.

The Court ruled, 8-1 per Justice Thurgood Marshall, and consistent with the Court’s companion decision in Police Department of Chicago v. Mosley (1972), that Rockford’s anti-picketing ordinance violated the Fourteenth Amendment’s equal protection clause but decided that the anti-noise ordinance was neither too vague nor unconstitutionally overbroad. The Court thus struck down Richard Grayned’s conviction for participation in a demonstration in front of the West Senior High School in Rockford, Illinois, while overturning his conviction under the noise ordinance.

In determining if the anti-noise ordinance was too vague, the Court held that laws must give the person of ordinary intelligence a reasonable opportunity to know what is prohibited so that he or she may act accordingly. According to the Court, vague laws work three evils on people: they may trap the innocent by not providing fair warning; they may lead to arbitrary and discriminatory enforcement; and they may operate “to inhibit the exercise” of First Amendment freedoms. The Court found that a person of ordinary intelligence could ascertain what conduct was forbidden, and therefore the ordinance was not void for vagueness.

The Court then noted that even a precise enactment can be overbroad if, in its reach, “it prohibits constitutionally protected conduct.” The crucial question is “whether the ordinance sweeps within its prohibitions what may not be punished under the First and Fourteenth Amendments.” Applying the strict scrutiny test the Court had applied in Tinker v. Des Moines Independent Community School District (1969), Marshall held that the anti-noise ordinance was narrowly tailored to meet the city’s compelling interest in having undisrupted schools. The Court relied heavily on the fact that the statute required the noise actually to disrupt or be on the brink of disrupting the normal school session.

Justice William O. Douglas dissented as to the anti-noise ordinance on the grounds that Grayned himself did not make any noise but rather marched peacefully. The noise, according to Douglas, was generated by the police who attempted to break up the march.