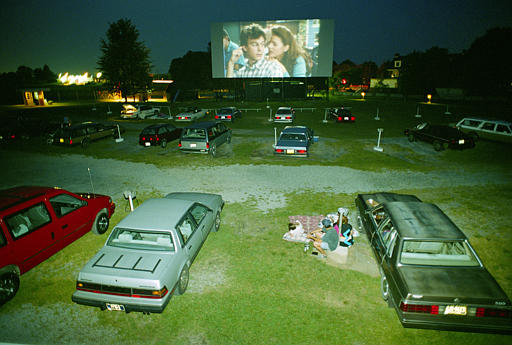 In Erznoznik v. City of Jacksonville (1975), the Supreme Court said an ordinance that prohibited showing films with nudity at drive-in theaters violated the First Amendment. (Image of 1993 Pennsylvania drive-in, AP Photo/Rusty Kennedy, used with permission from the Associated Press)

In Erznoznik v. City of Jacksonville, 422 U.S. 295 (1975), the Supreme Court held that under the First Amendment the government may not censor expression simply because it offends some people. City officials of Jacksonville, Florida, had contended that an ordinance that prohibited drive-in theaters from showing films that contained nudity protected the privacy rights of unwilling viewers and protected minors from harmful material.

Richard Erznoznik, the manager of a local drive-in theater, challenged the ordinance on First Amendment grounds. A Florida trial court upheld the law as a valid exercise of the city’s police powers. A Florida appeals court affirmed the decision, and the state Supreme Court declined to review the matter. Erznoznik then appealed to the U.S. Supreme Court, which reversed the Florida courts by a 6-3 vote.

Justice Lewis F. Powell Jr., who wrote the majority opinion, asserted that “when the government, acting as censor, undertakes selectively to shield the public from some kinds of speech on the ground that they are more offensive than others, the First Amendment strictly limits its power.”

In rejecting the city’s argument that the ordinance furthered its compelling interest in protecting minors from harmful material, Powell observed that the movie in question was not legally obscene.

Powell and his colleagues in the majority also rejected the city’s argument that the measure furthered the city’s valid interest in traffic safety.

“By singling out movies containing even the most fleeting and innocent glimpses of nudity the legislative classification is strikingly underinclusive,” Powell explained. “There is no reason to think that a wide variety of other scenes in the customary screen diet, ranging from soap opera to violence, would be any less distracting to the passing motorist.”

Chief Justice Warren E. Burger wrote a dissenting opinion, criticizing the majority’s analysis as “rigidly simplistic.” He noted that drive-in movie screens were a “unique type of eye-catching display that can be highly intrusive and distracting.” City officials, he wrote, could reasonably conclude that displays of nudity may cause traffic accidents.