By Cary Wiggins
Related cases in Obscenity and Pornography 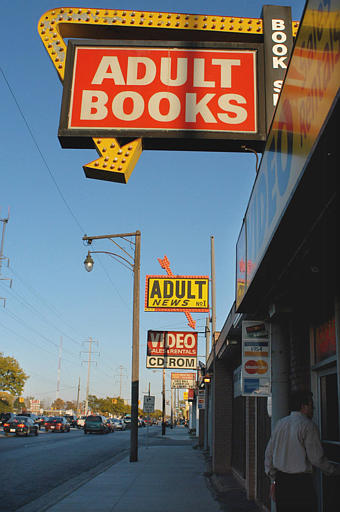 In Fort Wayne Books, Inc. v. Indiana (1989), the Supreme Court unanimously agreed that an Indiana provision allowing pretrial seizure of allegedly obscene material imposed an impermissible prior restraint. The case involved an Indiana adult book store and created a distinction between prior restraint and subsequent punishment. In this photo, an unidentified man enters an adult bookstore in Michigan. (AP Photo/Paul Warner, used with permission from the Associated Press)

The case prompted four opinions from the Court.

In evaluating the case’s competing constitutional interests, the Court observed that Marcus v. Search Warrant (1961) and its progeny require “rigorous procedural safeguards . . . before expressive materials can be seized as ‘obscene.’ ” Although the Fourth Amendment generally allows contraband and evidence of crimes to be “seized on probable cause,” a different standard applies when First Amendment material is involved.

Critical to Justice Byron R. White’s decision was that “[h]ere there was not — and has not been — any determination that the seized items were ‘obscene’ or that a RICO violation has occurred.”

With this understanding, as Justice White observed, “mere probable cause” that a violation had occurred was not adequate to remove books or films from circulation.

Case highlights distinction between prior restraint and criminal penalty

Fort Wayne Books highlights the distinction between prior restraint and a subsequent criminal penalty (for example, forfeiture). In cases leading up to Fort Wayne Books, such as Arcara v. Cloud Books, Inc. (1986), and in cases following the decision, such as Alexander v. United States (1993), the Court determined that criminal penalties shutting down adult entertainment businesses did not create an impermissible chilling effect.

This article was originally published in 2009. Cary Wiggins is a civil rights attorney with his practice in Atlanta. He has served as lead counsel in numerous cases involving First Amendment, Fourth Amendment, and Fourteenth Amendment claims. He frequently represents individuals who are asserting false arrest, malicious prosecution, excessive force, and public accommodation claims, as well as businesses seeking constitutional protections.