By Simon Stern
Related cases in Obscenity and Pornography 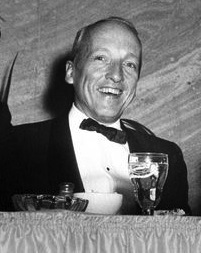 In Manual Enterprises v. Day, 370 U.S. 478 (1962), the Supreme Court held that three homoerotic physique magazines — MANual, Trim, and Grecian Guild Pictorial — were not obscene and could not be barred from the mails. J. Edward Day, postmaster general at the time, was the defendant in the case. (Image via John F. Kennedy Presidential Library and Museum, Feb. 25, 1961, by Abbie Rowe, public domain)

In Manual Enterprises v. Day, 370 U.S. 478 (1962), the Supreme Court held that three homoerotic physique magazines — MANual, Trim, and Grecian Guild Pictorial — were not obscene and could not be barred from the mails.

Presenting themselves as celebrations of “Greek” culture or healthy outdoor living, these magazines featured nude or semi-nude men in modeling and weight-lifting poses. The post office’s administrative board ruled that the magazines were obscene and that because the magazines carried advertisements telling readers how to obtain obscene photographs, they were also unmailable under the Comstock Act of 1873, 18 U.S.C. 461. The publishers unsuccessfully sought injunctive relief in federal district court to prevent J. Edward Day, the postmaster general, from implementing these rulings. The district court ruling was affirmed by the D.C. Circuit Court, but the Supreme Court reversed.

Court ruled that magazines were not patently offensive

In a plurality opinion, Justice John Marshall Harlan II (joined by Justice Potter Stewart) reasoned that obscenity includes two elements: “(1) patent offensiveness; and (2) ‘prurient interest’ appeal.” The magazines, although “dismally unpleasant, uncouth, and tawdry,” were not patently offensive. Harlan continued, “[T]hese portrayals of the male nude cannot fairly be regarded as more objectionable than many portrayals of the female nude that society tolerates.”

As for the advertisements, Harlan concluded that the government had not shown that the publishers knew the advertisers were selling obscene photographs. Harlan’s “patent offensiveness” requirement became part of the three-part test the Court later formulated in Miller v. California (1973).

Justice Tom C. Clark dissented. Like the concurrence, Clark ignored the question of the magazines’ obscenity. He concluded that the publishers’ knowledge of the advertisements was irrelevant and that the post office had congressional authority to regulate nonmailable material.

Manual Enterprises, arguably the first gay rights victory in the Supreme Court, had a significant impact on gay and lesbian magazine and book publishing over the following decades. The papers of the lead petitioner, Herman Womack, are now at the Cornell University Library.

This article was originally published in 2009. Simon Stern is Professor of Law and English at the University of Toronto.  He has published articles and book chapters on obscenity, copyright, criminal procedure, legal fictions, and the history of the common law.