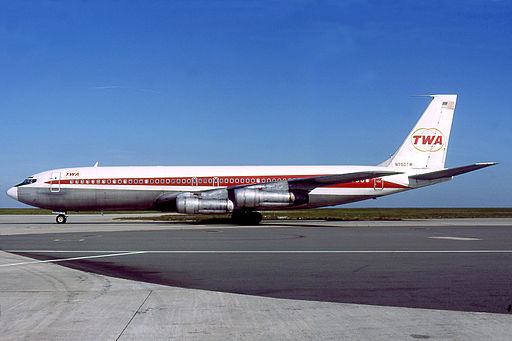 A man who transported 83 rolls of obscene film from San Francisco to Milwaukee on commercial airlines TWA and North Central Airlines was indicted under a pornography law. Although the First Amendment protects the right of an individual to possess pornography inside his home, the privacy right does not extend to transporting material, the Supreme Court said in United States v. Orito. (Photo of a Trans World Airlines Boeing 707-331B by Michel Gilliand via Wikimedia, GFDL, v. 1.2)

Specifically, it disallowed the transportation of obscene material by common carrier in interstate commerce. Although the First Amendment protects the right of an individual to possess pornography inside his or her home for personal use, that right does not extend to the transporting of such material.

The Court’s decision overturned a lower court ruling that had dismissed on overbreadth grounds an indictment against George Joseph Orito for knowingly transporting 83 rolls of obscene film from San Francisco to Milwaukee on commercial airlines.

Burger observed that the Court had rejected this reasoning in United States v. Thirty-seven Photographs (1971) and United States v. Reidel (1971), and had negated “the idea that some zone of constitutionally protected privacy follows such material when it is moved outside the home area.”

He remanded the case to the lower court to ascertain whether the materials at issue, which included multiple copies of the same film, were obscene under the standards affirmed the same day in Miller v. California and United States v. Twelve 200-Ft. Reels of Film.

Justice William O. Douglas wrote a dissenting opinion expressing his view that the right to privacy in Stanley covered this decision as well. A separate dissent, written by Justice William J. Brennan Jr. and joined by Justices Potter Stewart and Thurgood Marshall, argued that the law at issue was overly broad in that it appeared to cover both public and private transportation of such materials.