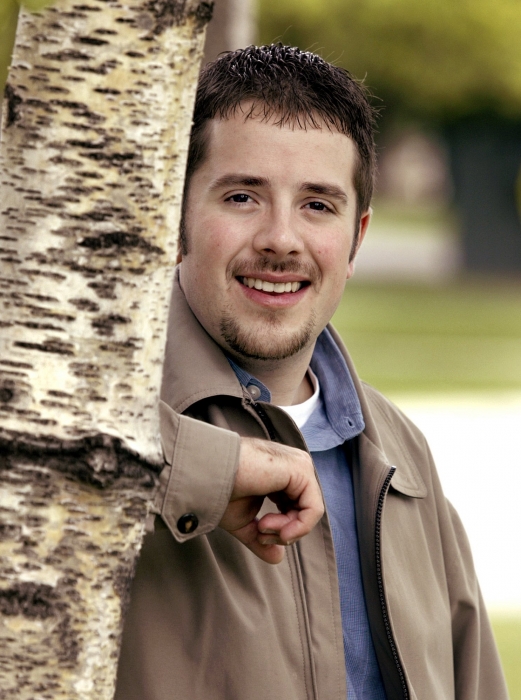 The state of Washington refused to let Joshua Davey, pictured here in 2003, participate in the Promise Scholarship program to help pay his tuition at Northwest College, which is affiliated with the Assemblies of God. Davey, who wanted a grant to study theology, sued and won. But the Supreme Court reversed and said the state of Washington was free to deny publicly funded scholarships to students who majored in theology on the basis of a state constitutional provision that prohibits any public funding for religious “worship, exercise or instruction,” although the establishment clause of the federal constitution did not require it. (AP Photo/Jeff T. Green, used with permission from The Associated Press)

In Locke v. Davey, 540 U.S. 712 (2004), the Supreme Court ruled that a scholarship program in Washington state that did not allow a student to use his publicly funded scholarship to major in theology did not violate his First Amendment rights of free exercise of religion or free speech.

In 1999, Washington implemented a new scholarship program. Designed to provide post-secondary educational opportunities in the state, the Promise Scholarships provided $1,000 to $1,500 to high-performing students who pursue their higher education in the state of Washington.

The program otherwise excluded only students pursuing a “degree in theology” because, much like the constitutions in 37 other states, the Washington state constitution prohibits any public funding for religious “worship, exercise or instruction.”

After receiving notification of award of this scholarship, Joshua Davey, a freshman at Northwest College, was told that he must either change his major (pastoral ministries) or lose his $1,500 scholarship. Davey elected to forego his scholarship and remain a theology major, but he also filed a lawsuit claiming several violations of his religious liberties.

After the state won in the district court and Davey won at the Ninth Circuit Court of Appeals, the Supreme Court ultimately upheld the statute.

Writing for the seven-member majority, Chief Justice William H. Rehnquist wrote that the exclusions found in Washington’s scholarship program were acceptable because they fell into the “play in the joints” between state and federal constitutional overlap.

Rehnquist further explained that although Washington could have allowed theology students to receive the scholarship without running afoul of the U.S. Constitution’s establishment clause, nothing in the free exercise clause required the exception’s removal. This moved the analysis back to the state constitutional requirements, which state courts had repeatedly interpreted as requiring such restrictions of public funding of religious instruction.

Justices Antonin Scalia and Clarence Thomas dissented, arguing that the Promise Scholarship exclusions amounted to a targeted discrimination against religious conduct and therefore violated the free exercise clause of the First Amendment. Scalia argued that the “play in the joints” argument ignored decades of jurisprudence that disallowed such looseness when confronting fundamental rights.

Taken together with the Court’s 2002 decision in Zelman v. Simmons-Harris (2002), which upheld the use of public money for school vouchers even for students attending religious schools, the legal framework for the voucher controversy becomes clearer.

This article was originally published in 2009. John Ferguson is a senior lecturer of Business Law and Ethics at Utah State University. Prior to his academic career Ferguson spent eight years as the First Amendment Education Coordinator at the Freedom Forum First Amendment Center at Vanderbilt University. While there he traveled across the country working with schools and communities to resolve First Amendment related controversies and wrote extensively on First Amendment matters.