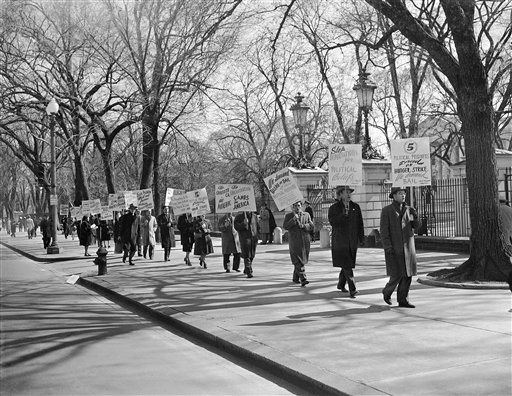 The per curiam Supreme Court decision in Kimm v. Rosenberg, 363 U.S. 405 (1960), focused chiefly on the self-incrimination provision of the Fifth Amendment, but it also had implications for First Amendment freedoms. They found that US laws made Communists ineligible for suspension of deportation and that the burden was on the petitioner to show he was eligible for such suspension. In this photo, a group of pickets carrying placards and chanting demands for the release of alleged alien Communists held at Ellis Island, parade in front of the White House at Washington, D.C., March 5, 1948. The men being held were awaiting deportation hearings. (AP Photo, used with permission from the Associated Press)

The per curiam Supreme Court decision in Kimm v. Rosenberg, 363 U.S. 405 (1960), focused chiefly on the self-incrimination provision of the Fifth Amendment, but it also had implications for First Amendment freedoms. In this case, the Court sustained denial of the petitioner’s application to have his deportation from the country suspended. They found that Section 19(c) of the Immigration Act of 1917, as amended the following year, and the Internal Security Act of 1950 made Communists ineligible for suspension of deportation and that the burden was on the petitioner to show he was eligible for such suspension.

Diamond Kimm, an immigrant who had been in the United States for many years, had applied for a suspension of an order deporting him to Korea, but during the deportation hearing he invoked his Fifth Amendment right to refuse to say whether he belonged to the Communist Party. The hearing officer then denied the suspension, which was affirmed by the Board of Immigration Appeals and the Ninth U.S. Circuit Court of Appeals.

On appeal, the majority of the Supreme Court held that the Internal Security Act of 1950 had amended the Immigration Act of 1918 to include Communists among those who could be deported. In the majority’s view, any application for suspension was “a matter of discretion and of administrative grace,” requiring an application to supply any information that would have a direct bearing on an individual’s eligibility.

Dissenters argued the "presumption of innocence"

Justice William O. Douglas authored a dissent, joined by Chief Justice Earl Warren and Justice Hugo L. Black. Douglas viewed this decision as on a par with the Court’s decisions in Barenblatt v. United States (1959) and Uphaus v. Wyman (1959) (1960), with which he also disagreed. He argued that the “presumption of innocence” was too important to require an alien to establish a negative. Invoking the Fifth Amendment should be considered a “neutral act, as consistent with innocence as with guilt.”

Justice William J. Brennan Jr. wrote another dissent, joined by Warren and Douglas, arguing that the government had the burden of establishing the deportability of aliens. He found that the ruling impinged on Kimm’s freedom of speech.