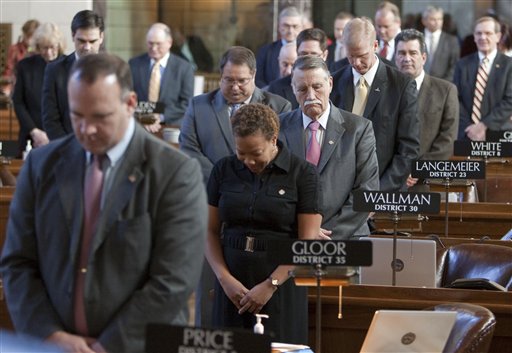 The Supreme Court decision in Marsh v. Chambers, 463 U.S. 783 (1983), found that the longstanding practice by which Nebraska hired a chaplain to open each legislative day with prayer did not violate the establishment clause of the First Amendment. Nebraska state senators stand, Wednesday, Nov. 4, 2009, during the prayer by the chaplain, on the opening day of a special session of the Legislature, in Lincoln, Nebraska. (AP Photo/Nati Harnik, used with permission from the Associated Press)

The Supreme Court decision in Marsh v. Chambers, 463 U.S. 783 (1983), found that the longstanding practice by which Nebraska hired a chaplain to open each legislative day with prayer did not violate the establishment clause of the First Amendment.

Since 1965 the legislature had employed Presbyterian minister Robert Palmer to offer the opening prayer. Ernest Chambers, a longstanding member of the Nebraska legislature, filed a lawsuit seeking to enjoin the practice. The Eighth U.S. Circuit Court of Appeals ruled that the practice violated the establishment clause of the First Amendment.

The Supreme Court reversed 6-3 in a majority opinion written by Chief Justice Warren E. Burger. Noting that this practice was “deeply embedded in the history and tradition of this country,” Burger traced the practice back to the Continental Congress and to the First Congress under the Constitution, which approved the appointment of a chaplain three days before agreeing to the language of the Bill of Rights. In Nebraska, the practice actually preceded statehood.

Although acknowledging that “[s]tanding alone, historical patterns cannot justify contemporary violations of constitutional guarantees,” Burger thought that this history helped verify that the practice posed no real threat of the establishment of religion. Burger pointed out that the participants involved were adults and that the prayers in question were “simply a tolerable acknowledgment of beliefs widely held among the people of this country.” Burger dismissed concerns generated by the fact that the chaplain had held his job for almost 20 years, that he was paid at public expense, and that the prayers were in the Judeo-Christian tradition. He further cited the Court’s dictum in Abington School District v. Schempp (1963), about distinguishing “between real threat and mere shadow.”

In dissent, Justice William J. Brennan Jr. (joined by Justice Thurgood Marshall) indicated that he had changed his thoughts on the subject since his concurring opinion in Abington. He believed that Nebraska’s practice violated all three prongs of the Lemon test — the primary purpose and primary effect of the practice were to advance religion, and it excessively involved the state both in “monitoring and overseeing religious affairs” and in creating the possibility of political divisiveness. Brennan further argued that the practice trenched on the principles of “separation” of church and state and “neutrality” that he believed the establishment clause represented. He believed that these principles further served four purposes:

Rather than simply acknowledging the importance of religion to the people, Brennan argued that the state was actually sponsoring a religious practice. Brennan had three responses to the majority’s historical arguments.

In a separate dissent, Justice John Paul Stevens expressed concern that a democratically elected legislature was always likely to select clergy of those denominations that are in the ascendancy.

Marsh v. Chambers is an example of a Supreme Court decision that accommodates a religious practice largely on the basis of history and tradition. Relying large on the decision in Marsh, in Town of Greece v. Galloway (2014), the Supreme Court narrowly upheld the practice of a New York town of having a prayer before its meetings.