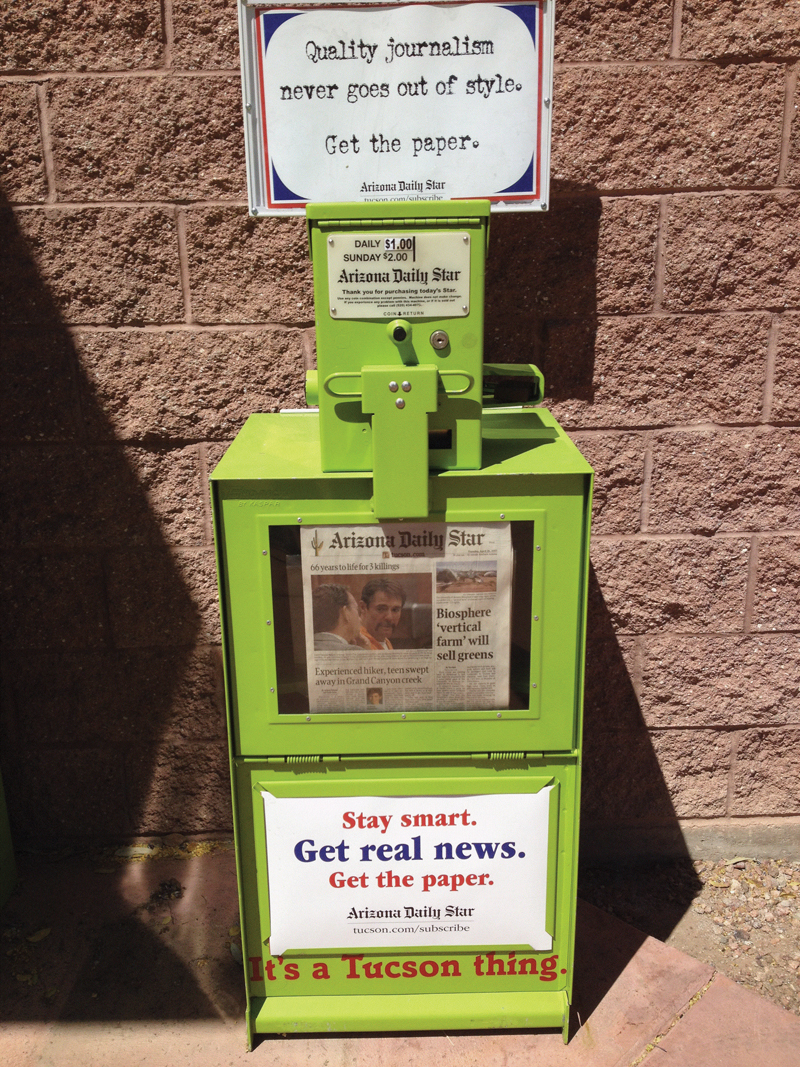 In Citizen Publishing Co. v. United States (1969) the Supreme Court upheld a lower court ruling affirming that an agreement between two Tucson newspapers -- the Arizona Daily Star and the Tucson Citizen -- violated federal antitrust laws and that the Justice Department was correct in requiring that the two papers act independently of each other.

In Citizen Publishing Co. v. United States, 394 U.S. 131 (1969), the Supreme Court upheld a lower court ruling affirming that an agreement between two Tucson newspapers violated federal antitrust laws and that the Justice Department was correct in requiring that the two papers act independently of each other.

In so doing, it made it clear that the First Amendment did not exempt news organizations from antitrust laws.

In the early twentieth century, Tucson, Arizona, had two newspapers: the Tucson Citizen, an evening paper, and the Arizona Daily Star, which appeared daily and on Sundays.

The Star generally sold 50 percent more advertising space than its competitor, and accordingly enjoyed profits while the Citizen sustained losses. This continued until 1940, when the two newspapers entered into a 15-year joint operating agreement (JOA), which in 1953 was extended until 1990.

The agreement allowed for the formation of Tucson Newspapers, Inc. (TNI), a company owned equally by the Star and the Citizen that eliminated all competition between them through price fixing, profit pooling, and market control. With the cessation of their rivalry, the papers’ combined profits rose significantly.

In 1965 the U.S. government filed a complaint in district court charging violations of the Sherman Antitrust Act and the Clayton Act, which also dealt with antitrust issues. The court agreed with the government.

First Amendment does not exempt the press from antitrust laws

In the Supreme Court’s majority opinion, Justice William O. Douglas wrote that the newspapers were, indeed, guilty of the violations as charged. He cited insufficient evidence to support a “failing company” defense — that in the course of liquidating the Citizen, the Star was the only available purchaser.

Justice John Marshall Harlan II concurred, but believed that the critical issue rested not upon the original agreement of 1940, but upon the decision to extend the agreement beyond its original termination date in 1953, after which neither paper would be a failing enterprise under terms of the applicable laws.

Justice Potter Stewart dissented, arguing that the defendants were not given proper opportunity to establish the Citizen as a failing company. Justice Abe Fortas did not participate in the case.

The ruling restricted neither newsgathering nor news dissemination as it relates to the First Amendment.

Rather, its purpose was to ensure an unrestricted flow of information by reestablishing competition and free press within the Tucson newspaper industry.

Although the First Amendment was not the primary concern of the Justice Department, the Court, or the newspapers involved in Citizen Publishing, the ruling opened the door for Congress to regulate the media under certain circumstances to preserve freedom of the press, such as eliminating monopolies that might stifle the publication of competing newspapers.

In response to the Court’s decision, Congress passed the Newspaper Preservation Act of 1970 to allow news organizations to enter into joint operating agreements. Legislators argued that the role of government in preserving an “editorially and reportorially independent and competitive” press by allowing certain business agreements would guarantee the freedoms outlined in the First Amendment.