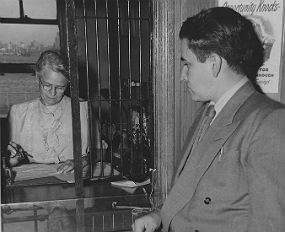 The arrest and detention of alien residents under the Internal Security Act of 1950, also known as the McCarran Act, led to a challenge that made it to the Supreme Court. The court upheld the arrests in Carlson v. Landon (1952). The Act also prohibited entry to the United States of any person affiliated with Communism. In this photo from the National Parks Service, a clerk mans the Immigration and Naturalization Service Detention Station at Ellis Island circa 1945 where the detainee population increased from 400 people to 1,200 people after the Act's passage. (Public domain)

In Carlson v. Landon, 342 U.S. 524 (1952), the Supreme Court upheld a decision by the attorney general, as executive head of the Immigration and Naturalization Service, to detain resident aliens without bail, pending a determination on deportability.

The case involved the arrest of detainees under the Internal Security Act of 1950, also known as the McCarran Act, for membership in or ties to the Communist Party of the United States. The Court’s 5-4 decision upheld the detention of all but one of the aliens.

In the opinion for the Court, Justice Stanley F. Reed portrayed residence of aliens in the United States as a privilege rather than a right and stated that the government had not abused its discretion in this case.

He wrote, “As all alien Communists are deportable, like Anarchists, because of Congress’s understanding of their attitude toward the use of force and violence in such a constitutional democracy as ours to accompany their political aims, evidence of membership plus personal activity in supporting and extending the Party’s philosophy concerning violence gives adequate ground for detention.”

Black's dissent focuses on freedom of 'thought, speech and press'

In dissent, Justice Hugo L. Black argued that the government had violated the First (“thought, speech and press”), Fifth (due process), and Eighth (bail) Amendments and asserted that if the McCarran Act gave discretion to anyone, it limited it to the attorney general.

Black maintained that “the First Amendment grants an absolute right to believe in any governmental system, discuss all governmental affairs, and argue for desired changes in the existing order.”

He further observed that “those who wrote and adopted our First Amendment weighed those dangers [of liberty] against the dangers of censorship and deliberately chose the First Amendment’s unequivocal command that freedom of assembly, petition, speech and press shall not be abridged.”

Like Black, Justice William O. Douglas did not think that aliens could be detained or expelled “for their past actions or present expressions unaccompanied by conduct.”