By John R. Vile
Related cases in Freedom of the Press 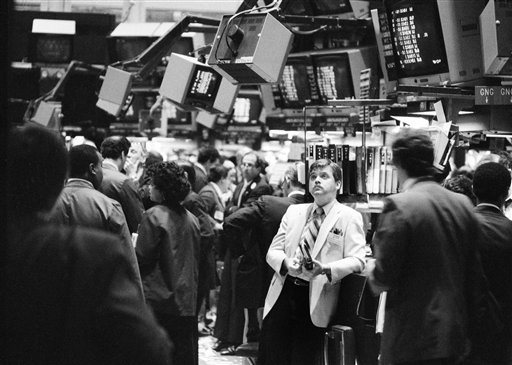 In Lowe v. Securities and Exchange Commission (1985), the Supreme Court ruled that the SEC could not prevent a convicted financial manager from publishing an investment newsletter, saying such a prohibition would be a violation of the First Amendment's freedom of the press. In this photo, a trader watches the monitor at the New York Stock Exchange prior to the close of trading in 1985. (AP Photo/Mario Suriani, used with permission from the Associated Press.)

In Lowe v. Securities and Exchange Commission, 472 U.S. 181 (1985), the Supreme Court further emphasized the strong presumption against prior restraint under the free press provision of the First Amendment by reversing a decision by the Second Circuit Court of Appeals and holding that the Securities and Exchange Commission (SEC) could not, under the Investment Advisers Act of 1940, restrain the publication of a periodical containing investment advice simply because its authors were not registered as investment advisors under the 1940 law.

The SEC had issued an order revoking the registration of Christopher Lowe’s Management Corporation and ordering him to disassociate from any investment adviser role after he was convicted of misappropriating funds and other investment-related offenses. The SEC had subsequently sought and received an injunction from a federal appeals court preventing Lowe from publishing his “Investment and Financial Letter,” which gave out general market advice.

Justice John Paul Stevens based his decision for the Supreme Court on an interpretation of the Investment Advisers Act of 1940.

He believed the law was designed only to regulate person-to-person advice rather than advice given in general periodicals. He said such general publications fit under the law’s exclusion of “the publisher of any bona fide newspaper, newsmagazine or business or financial publication of general and regular circulation.”

Stevens did not believe that Congress would have purposely adopted a law that contravened the Court’s protection for freedom of the press in Near v. Minnesota (1931) and Lovell v. City of Griffin (1938).

Justice Byron R. White wrote a concurring opinion, joined by Chief Justice Warren E. Burger and Justice William H. Rehnquist, arguing that the Court had improperly construed the statute so as to exclude the publication at issue but that the publication should be protected under the First Amendment. Reviewing a number of cases that dealt with the licensing of professionals, White concluded that such regulations were acceptable “if they ‘have a rational connection with the applicant’s fitness or capacity to practice’ the profession.”

Justices said restraints on commercial speech should be narrowly tailored

Although the Court had recognized some limitations on commercial speech, it had concluded that “a flat prohibition on prior restraint on speech is, applied to fully protected speech, presumptively invalid and may be sustained only under the most extraordinary circumstances.”

He observed that “even where mere ‘commercial speech’ is concerned, the First Amendment permits restraints on speech only when they are narrowly tailored to advance a legitimate governmental interest.” While the governmental interest of keeping “investors from falling into the hands of scoundrels and swindlers” was valid, “the means chosen ... is extreme.”