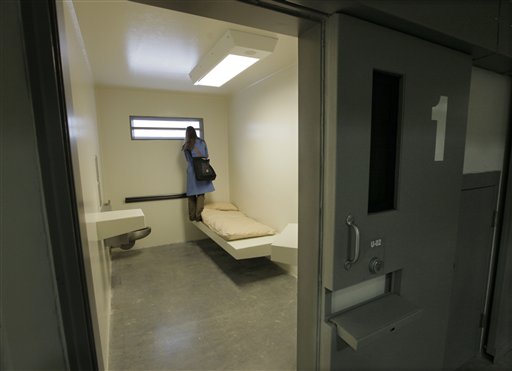 The Supreme Court issued rulings in two cases in 1974 in which the press was denied access to interview inmates in state and federal prisons. In Saxbe v. Washington Post Co., the Court upheld a federal ban on press interviews with inmates in federal prisons. (The companion case, Pell v. Procunier, had the same result for state prisons.) In both cases, the justices rejected arguments that the First Amendment protected journalists from blanket laws and policies banning interviews of people in prison. In this photo, a journalist in 2009 peers out the window of a cell during a media tour of a prison in Illinois that was being acquired by the federal government. (AP Photo/M. Spencer Green. Reprinted with permission from The Associated Press.)

In Saxbe v. Washington Post Co., 417 U.S. 843 (1974), which was decided the same day as Pell v. Procunier, the Supreme Court established that the press has no general First Amendment right to interview specific prison inmates.

The case involved a challenge by The Washington Post and one of its reporters to a federal ban on such interviews. The newspaper contended that the blanket ban on press-prisoner interviews infringed on the press’s ability to gather news and report on important issues for the public. Both a federal district court and federal appeals court sided with the newspaper, agreeing that the ban violated the First Amendment.

On appeal, the Supreme Court rejected the First Amendment claim and reversed 5-4. Writing for the majority, Justice Potter Stewart, who also authored the Court’s decisions in Pell and in Branzburg v. Hayes (1972), determined that this case was “constitutionally indistinguishable” from Pell, in which the Court had upheld a similar California policy banning press-prisoner interviews.

In Pell, the Court had written that “newsmen have no constitutional right of access to prisons or their inmates beyond that afforded the general public.” (See article on press access.)

The majority opinions in Saxbe and Pell led the Court to hold a few years later in Houchins v. KQED (1978) that the First Amendment does not provide a general right of access to a county jail and that the openness of penal institutions is a matter for the legislative branch.