By Richard L. Pacelle Jr.
Related cases in Incorporation / Application of the Bill of Rights to the States 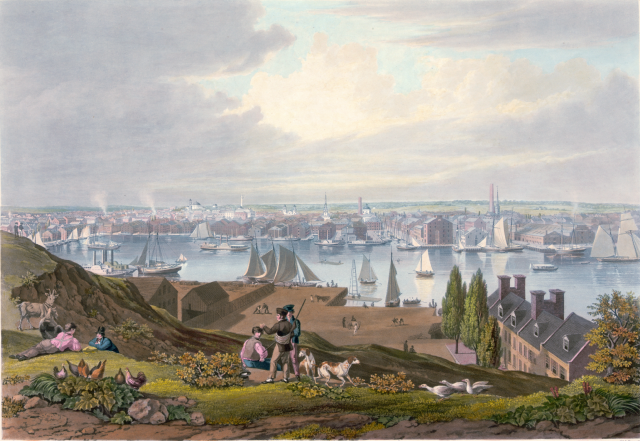 Baltimore Harbor as seen from Federal Hill in 1831. The Harbor was involved in the 1833 Supreme Court case Barron v. Baltimore which decided that the Bill of Rights extended only to the federal government, not state and local ones. Although the Supreme Court has never expressly overturned Barron, the Bill of Rights has been selectively incorporated to the states. (Image via Library of Congress, painted by W. J. Bennett, public domain)

Barron sued Baltimore for taking his property without compensation

The case arose from a series of street improvements made by the city of Baltimore that required diverting several small streams. As a result, large quantities of dirt and sand were swept downstream into the harbor, causing problems for wharf owners, including John Barron, who depended on deep water to accommodate vessels.

His business damaged, Barron sued the city of Baltimore to compensate for his financial losses. Barron claimed that the city’s activities violated the Fifth Amendment takings clause—that is, the city’s development efforts effectively allowed it to take his property without just compensation. Barron sued for $20,000, but the county court awarded him only $4,500.

When the Maryland Court of Appeals reversed that decision, Barron took his case to the U.S. Supreme Court. There, the case raised the constitutional question of whether the protections of the Fifth Amendment (and more generally of the Bill of Rights) applied to the states and local governments.

In a unanimous decision authored by Chief Justice John Marshall, the Court ruled that the Fifth Amendment did not apply to the states. The decision stood in contrast with many of the major landmark decisions of the Marshall Court that expanded national power. This shift was a function of changes in the composition of the Court and probably a natural retreat from the strong nationalist tendencies of the Marshall Court.

In his opinion, Marshall wrote that the question raised by the case was of “great importance, but not of much difficulty.” Indeed, the Court had not even required Maryland’s attorney general, Roger B. Taney (Marshall’s eventual successor), to appear for the state. Marshall argued that the drafters of the Bill of Rights were specifically trying to halt potential abuses by the central government.

He wrote: “[T]he provision in the fifth amendment to the constitution, declaring that private property shall not be taken for public use, without just compensation, is intended solely as a limitation on the exercise of power by the government of the United States, and is not applicable to the legislation of the states.”

The decision was a motivating factor in creating the 14th Amendment

The Barron decision effectively prevented many state cases from making their way to the federal courts. It also left the states free to disregard the Bill of Rights in their relationships with their citizens, who were left to rely instead on state laws and constitutions for protection of their rights.

Eventually, the decision was a motivating factor in the construction of the 14th Amendment by the post–Civil War Congress. Some sponsors were intent on ensuring that this amendment applied some or all of the provisions of the Bill of Rights to the states.

Although the Supreme Court has never expressly overturned Barron, the selective incorporation of the Bill of Rights to the states, beginning with the incorporation of the takings clause in Chicago, Burlington, and Quincy Railroad Co. v. Chicago (1897) and spreading to other provisions with Gitlow v. New York (1925), has made the case more of a historical landmark than a limitation on the current reach of the provisions of the Bill of Rights.

The Court has now applied all the provisions of the First Amendment to the states.