By John R. Vile
Related cases in Incorporation / Application of the Bill of Rights to the States 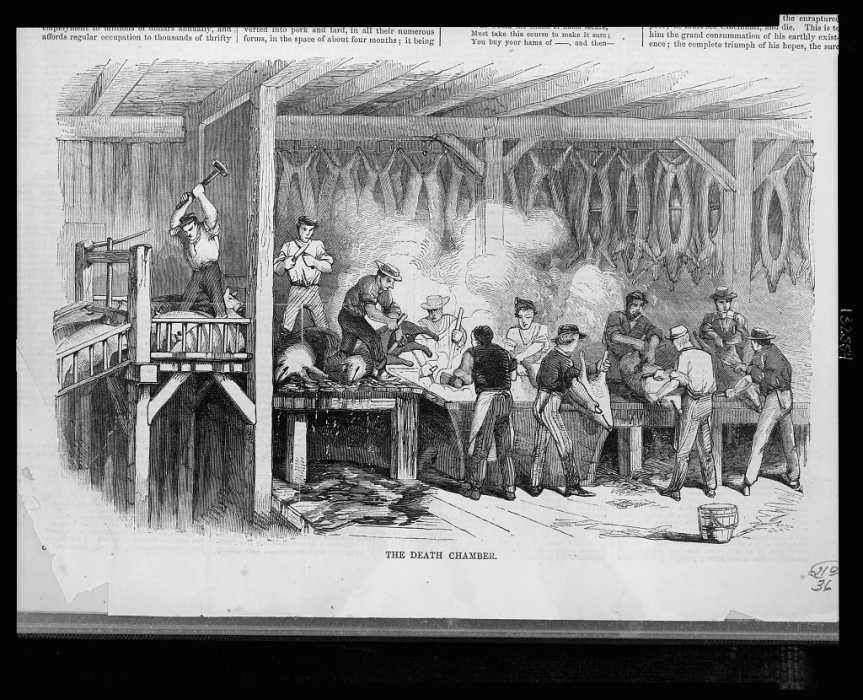 A Supreme Court case cluster, the Slaughterhouse Cases of 1873, was a 14th Amendment challenge to a Louisiana regulation limiting butchering to only select slaughterhouses. Though the ruling rejected the butchers' claims, Justice Miller suggested First Amendment rights could be incorporated to states. This is a wood engraving, circa 1860, of a Cincinnati, Ohio, slaughterhouse scene. (Image via Library of Congress, public domain)

The Supreme Court’s ruling in the Slaughterhouse Cases, 83 U.S. 36 (1873), represents the first instance in which the Court interpreted the Fourteenth Amendment.

In this case, which was a consolidation of three similar cases, the Court rejected a claim that butchers in New Orleans filed against a set of state regulations directing that all butchering take place in selected abattoirs. The butchers argued that these regulations violated the privileges and immunities clause of the Fourteenth Amendment.

In its ruling, the Court offered a narrow interpretation of that clause, with significant implications for the future application of First Amendment rights to the states.

Miller thought the pervading purpose of the Fourteenth Amendment had been that of protecting former slaves, and he hesitated to expand its protection for fear of altering the distribution of powers between the state and national governments. He thought that the state regulations at issue, which appear to have been influenced both by genuine health concerns and by legislative deal making, could be justified as a legitimate exercise of state police powers.

Significantly, in describing the limited number of rights that he believed the privileges and immunities clause of the Fourteenth Amendment protected, Miller listed “[t]he right to peaceably assemble and petition for redress of grievances,” which he presumably derived from the First Amendment.

He connected privileges and immunities with the right “to come to the seat of government to assert any claim he may have upon that government, to transact any business he may have with it, to seek its protection, to share its office, [and] to engage in administering its functions.”

Four justices, led by Justice Stephen Field, dissented. Field focused on using the Fourteenth Amendment not to protect the rights embodied in the First Amendment but to protect economic rights.

The “incorporation” of provisions of the First Amendment into the Fourteenth Amendment did not begin until the Court’s decision in Gitlow v. New York (1925), and in this and in later cases the Court chose to rely chiefly on the due process clause rather than on the privileges and immunities clause.