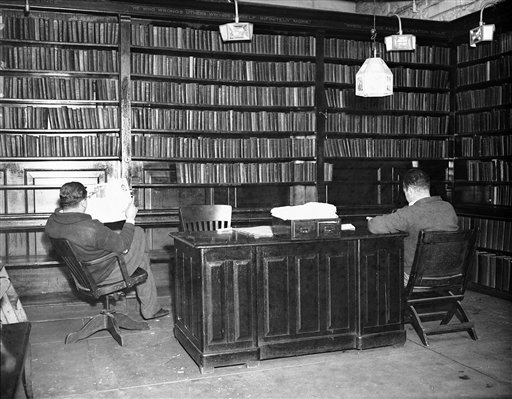 Bell v. Wolfish (1979) said a New York prison restriction against pretrial detainees' receiving hardcover books did not violate the First Amendment as it was neutrally applied. In this historic photo, inmates of the penitentiary on welfare Island in New York, take advantage of the prison library, Dec. 16, 1931. (AP Photo, used with permission from the Associated Press)

Prisoners in the Metropolitan Correctional Center in New York brought challenges to several policies, including the facility’s practice of “double-bunking” inmates; rules prohibiting inmates from receiving hardcover books unless they were mailed directly from publishers, book clubs, or bookstores; restrictions on other incoming packages; searches of inmates’ rooms; and strip searches of inmates after they received visitors. The restriction related to books directly implicated the First Amendment.

Chief Justice William H. Rehnquist wrote the majority opinion, which dismissed all challenges. In dealing with the prohibition of incoming books from all but bookstores and publishers, Rehnquist pointed to testimony that indicated that contraband could be smuggled inside books.
He observed as well that the policy was further immunized from scrutiny because it was applied “in a neutral fashion, without regard to the content of the expression” — that is, it still “allows soft-bound books and magazines to be received from any source and hardback books to be received from publishers, bookstores, and book clubs.” He also noted that the facility had a “relatively large” library for inmate use, and that detainees were affected for no more than 60 days.
In his concurrence, Justice Lewis F. Powell Jr. agreed with most of the decision, including the part relative to the First Amendment.

Justice Thurgood Marshall dissented. Addressing the book issue, he questioned whether the government had established a “compelling necessity” for its regulations. He also thought it was obligated to consider the “least restrictive alternatives.”
Justice John Paul Stevens, joined by Justice William J. Brennan Jr., also dissented. He objected to the Court’s application of the “minimum rationality” standard — “language traditionally applied to restrictions on economic activities such as selling hot dogs or eyeglasses.”
John Vile is professor of political science and dean of the Honors College at Middle Tennessee State University. He is co-editor of the Encyclopedia of the First Amendment. This article was originally published in 2009.
Send Feedback on this article