By David Schultz
Related cases in Libel and Slander 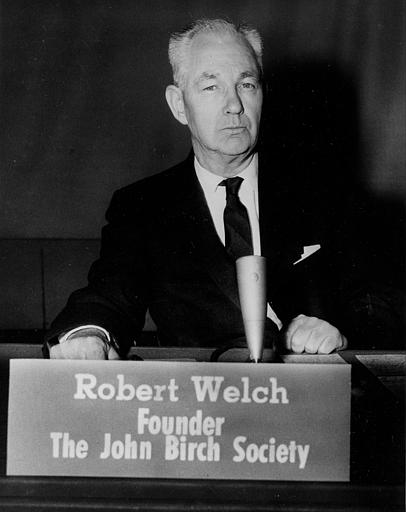 Robert Welch, founder of the ultraconservative John Birch Society and publisher of its monthly American Opinion magazine, printed an article in 1969 saying that a lawyer representing a family suing a police officer who shot their son was a "Communist-fronter" and part of a Communist campaign against police.  The lawyer, Elmer Gertz, sued for libel. The lower courts applied the "actual malice" standard, but the Supreme Court reversed in Gertz v. Robert Welch, Inc. (1974), saying Gertz was a private figure so he did not have to show actual malice. (AP photo, used with permission from the Associated Press.)

In Gertz v. Robert Welch, Inc. (1974), the Supreme Court ruled that the First Amendment does not require a private individual who is publicly libeled to meet the burden of proof articulated in New York Times Co. v. Sullivan (1964) to prevail in a defamation suit.

In general, the First Amendment grants broad leeway to engage in matters of public debate, even if that discussion involves criticism of individuals. In some cases, this criticism may not be completely factually accurate, necessitating some rule to determine when or whether the commentary is actionable as defamation.

In Sullivan, the Court devised the standard that public officials must show “actual malice” or that the individuals who criticized them knew the information alleged to be false and that they had acted with reckless disregard for the truth. The Court set a high standard of proof for public officials to promote the First Amendment goals of open, robust debate and to prevent minor factual inaccuracies from chilling criticism of the government.

In addition to the standard set for public officials in Sullivan, the Court stated in Curtis Publishing Co. v. Butts (1967) that this burden of proof would also have to be met by public figures if they too wished to prevail in these types of suits. These cases left unresolved, however, what the First Amendment required concerning criticism of private individuals.

In Rosenbloom v. Metromedia, Inc. (1971), a plurality of the Supreme Court appeared to extend the Sullivan standard to private individuals if the matter involved discussion of public interest. This was the issue again addressed in Gertz.

Elmer Gertz had been hired as an attorney to represent the family of a youth, Robert Nelson, who had been shot by Chicago police officer, Ronald Nuccio.

Robert Welch, a leader of the ultraconservative John Birch Society and publisher of the American Opinion magazine, ran an article asserting that the testimony against the officer was false and that Gertz was involved in a Communist plot to discredit Chicago police. The article described Gertz as a “Leninist” and a “Communist-fronter.” It also stated that Gertz had been an officer of the National Lawyers Guild, described as a Communist organization that helped “plan the Communist attack on the Chicago police during the 1968 Democratic Convention.”

Many of the statements were factually incorrect, and Welch had done little to verify the facts. Gertz sued Welch and his publication. The federal district and appellate courts applied the Sullivan standard, and Welch prevailed. The Supreme Court reversed.

In short, the First Amendment does not protect defamers who libel private individuals, and the government has a legitimate interest in offering compensation via punitive damages to those whose reputation is hurt by falsehoods. The Court held that so long as states do not impose liability without criminal intent, they should be free to set standards of proof for proving defamation against private individuals.

In dissent, Justice William J. Brennan Jr. would have applied the Sullivan standard to private individuals much the same way he argued in Rosenbloom. For Brennan, the distinction of an individual as either a private or public figure was immaterial to the underlying First Amendment values that the Constitution sought to uphold when it came to public criticism and debate.

Brennan saw no difference in the standard that should be afforded to public officials, who voluntarily enter the public forum, versus the one that should apply to private individuals. In both cases, as Brennan saw it, the First Amendment principles of free speech and freedom of the press should make it difficult to sue individuals for defamation if they engage in debate over matters of public importance.

After the Supreme Court sent the case back to the Illinois court, a jury awarded Gertz $400,000 in damages. Although American Opinion magazine appealed to the Supreme Court, saying the state law made it too easy for private figures to win defamation cases, the Supreme Court declined to hear the case.