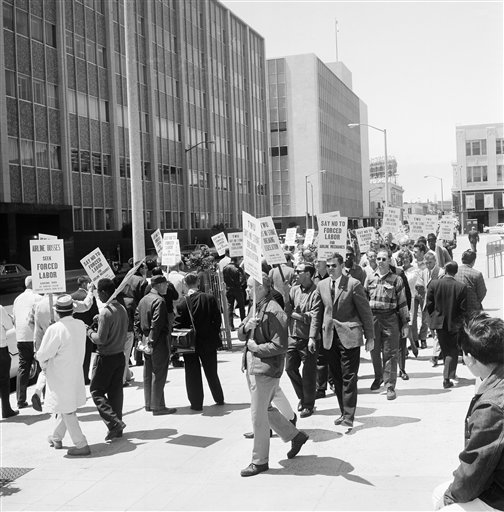 Linn v. United Plant Guard Workers of America (1966) said a libel lawsuit based on statements made during a union organizing campaign could not be pre-empted by the National Labor Relations Board's jurisdiction over collective bargaining issues. Though labor disputes can be heated affairs, the Court made clear that the National Labor Relations Act did not preclude state libel laws. In this photo, pickets supporting striking airline machinists staged a one-hour demonstration in 1966 at San Francisco's Federal Building. (AP Photo/Robert W. Klein, used with permission of The Associated Press.)

In Linn v. United Plant Guard Workers of America, 383 U.S. 53 (1966), the Supreme Court overturned lower federal court rulings to decide that the National Labor Relations Act (NLRA) does not bar civil libel actions in cases where plaintiffs can show that statements were made with malice and resulted in injury.

It thus affirmed that libel is not protected by the First Amendment.

Linn claimed he was libeled during labor dispute

Linn, an officer of an employer that the union was seeking to unionize, said that he had been libeled during the labor dispute. The U.S. district court dismissed Linn’s complaint on the basis that the National Labor Relations Board (NLRB) had exclusive jurisdiction, and the Sixth Circuit Court of Appeals affirmed.

Justice Tom C. Clark wrote the opinion on statutory, rather than constitutional, grounds for five members of the Court.

Acknowledging that labor disputes were often “heated affairs” with correspondingly heated language, he did not think that the NLRA had intended to preclude state attempts to preserve domestic peace through the initiation of libel actions. The NLRB itself had not interpreted the law to give “either party license to injure the other intentionally by circulating defamatory or insulting information known to be false.”

New York Times Co. v. Sullivan (1964) had established that, however wide open debate should be, the First Amendment did not protect “malicious libel” made with knowledge of, or with reckless disregard as to, its truth or falsity. Although the NLRB punished statements that were false or coercive, it did nothing specifically to “compensate” victims or “vindicate” their reputations. Individuals who could show such harm had the right to vindicate their claims in state courts. At the end of his opinion, however, Clark left open the possibility that the Court might later reverse itself if it found a greater need to curtail such suits.

Justice Hugo L. Black’s dissent accused the Court of tossing “a monkey wrench into the collective bargaining machinery Congress set up to try to settle labor disputes.” He thought the possibility of such suits was more likely to fuel violence than to promote peace. He reiterated his view from Sullivan that libel laws were inconsistent with the First Amendment.

In a separate dissent, joined by Chief Justice Earl Warren and Justice William O. Douglas, Justice Abe Fortas charged that the decision “opens a major breach in the wall which has heretofore confined labor disputes to the area and weaponry defined by federal labor law, except where violence or intimidation was involved.”

He thought the standard of “malice” was “largely subjective” and observed that “injury” would not be “limited to tangible trauma.” Fortas believed that the decision “threatens the degree of equilibrium which has been achieved.” He would, however, have permitted libel suits in cases where libelous statements made during the course of labor disputes were not confined to issues, parties, or agents involved in the disputes.