By Rachel M. Janutis
Related cases in Freedom of the Press, Inside courtrooms, Prior Restraint, Press Access 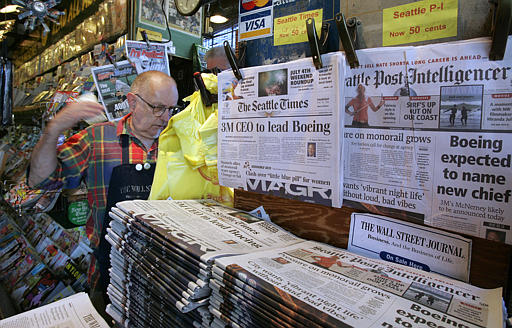 In Seattle Times Co. v. Rhinehart (1984), the Supreme Court decided that an order prohibiting public dissemination of information received by a newspaper during discovery in a libel lawsuit did not violate the First Amendment. In this photo, Seattle's two newspapers are shown at a newsstand in 2005. (AP Photo/Elaine Thompson, used with permission from the Associated Press)

In Seattle Times Co. v. Rhinehart, 467 U.S. 20 (1984), the Supreme Court ruled that a protective order prohibiting the publication of information gained by a newspaper through discovery in a civil lawsuit did not violate the First Amendment.

The Court’s decision resolved a conflict among lower courts about the strength of a litigant’s First Amendment interest in materials obtained through discovery.

In Rhinehart, a nontraditional religious group the Aquarian Foundation and its leader had sued the Seattle Times and the Walla Walla Union-Bulletin for libel, alleging that both papers had published false information that detrimentally affected membership and contributions to the group.

As part of the discovery process, the trial court ordered the plaintiffs to disclose to the newspapers the names and addresses of members and donors. The court also issued a protective order prohibiting the newspapers from publishing or disseminating this information or from using it in any way except to prepare for and try the case because the plaintiffs had offered evidence that threats of violence had been directed at group members.

Supreme Court examined whether protective order was prior restraint

In a majority opinion authored by Justice Lewis F. Powell Jr. and joined by six other justices, the Supreme Court rejected the argument adopted by lower courts that a protective order limiting a party’s ability to disseminate information obtained in discovery represented a paradigmatic prior restraint on speech subject to strict scrutiny.

Instead, the Court upheld the protective order because it furthered a substantial government interest in preventing the misuse of information produced through the court’s coercive powers. In so doing, the justices noted that litigants were able to obtain a broad scope of information through discovery and that public disclosure of some of that information could be damaging to the party forced to produce it.

The Court also noted that federal and state court rules required a party seeking a protective order to make a showing of “good cause” that the order was necessary to prevent annoyance, embarrassment, or oppression. It found that such a showing was sufficient to satisfy the First Amendment and that no heightened scrutiny beyond this was required.

Court looked at discovery procedures in evaluating prior restraint

In distinguishing the protective order from other prior restraints, the Court relied on two unique features of discovery.

First, in this instance, the newspapers were able to gain access to the information only because the trial court had compelled the plaintiffs to disclose the information as part of the discovery process.

This article was originally published in 2009. Rachel M. Janutis is a Professor of Law at Capital University Law School.