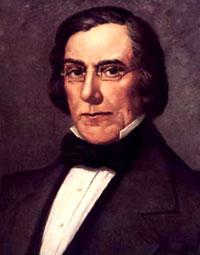 Supreme Court Justice Peter V. Daniel, pictured here, wrote an opinion in 1845 in an early libel case brought by a public official. In the case, Robert White had sued individuals who had written letters to public officials questioning his fitness to remain in the office of collector and customs. Daniel thought that libel against a public officer could be shown if the letter writers had a malicious intent to defame. (Image via the Supreme Court Historical Society, public domain)

White v. Nicholls, 44 U.S. 266 (1845), is an early Supreme Court decision on libel actions involving letters sent to the president and other public officials. The Court held that petitions to the government were not exempt from prosecutions for libel when they involved malice. Although the Court’s decision touches on First Amendment–related issues, it does not mention the amendment by name.

Robert White had sued individuals in the District of Columbia for letters that they had written to the president and to other public officials questioning his character and his fitness to remain in the office of collector and customs. The Court had to decide whether these letters were malicious and whether they lost their character as libel because they related to a public official.

In his opinion for the Court, Justice Peter V. Daniel surveyed existing case law (mostly from Great Britain) and legal commentary. He observed that actions for libel and slander were typically initiated for cases where “the tendency of it be to bring a man into hatred, contempt, or ridicule.” Malice on the part of the writer is the essential ingredient in such cases.

Courts had recognized four exceptions to libel. These included words of caution written to a friend; words spoken in regard to a servant by a former master; words used in legal or judicial proceedings; and publications “made in the ordinary mode of parliamentary proceedings.”

Although he acknowledged the existence of contrary precedent, Daniel did not think that all petitions to the government were exempt from prosecutions for libel, at least not when they involved malice. He quoted Chancellor Kent in the case of Commonwealth v. Clapp (Mass. 1808) for the principle that individuals had the right to appeal for the removal of unworthy officials since an individual who put himself up as candidate “must be considered as putting his character in issue, so far as it may respect his fitness and qualifications for the office; and publications of the truth on this subject, with the honest intention of informing the people, are not a libel.”

Quoting from the same decision, however, Daniel observed that “for the same reason, the publication of falsehood and calumny against public officers, or candidates for public offices, is an offence dangerous to the people, and deserves punishment. ... The publication of a libel maliciously, and with intent to defame, whether it be true or not, is clearly an offence against law on sound principles.”

Daniel concluded that publications that subject individuals to punishment or make them look “infamous, or odious, or ridiculous” are “prima facie a libel.” In such cases, the proof of libel arises from publication; “justification, excuse, or extenuation, if either can be shown, must proceed from the defendant.”

Daniel also concluded that libel could be shown in cases of otherwise privileged communications if the plaintiff in such cases could establish “falsehood and the absence of probable cause.” In the case at hand, Daniel thought that the jury should have been entrusted with the decision as to whether the letters had or had not been marked by malice.

The modern law of libel in relation to public figures was chiefly established in New York Times Co. v. Sullivan (1964), where the Court established that to prove libel public officials needed to establish that stories against them were published with “actual malice,” that is, with knowledge that they were false or with “reckless disregard” for whether they were true or not.