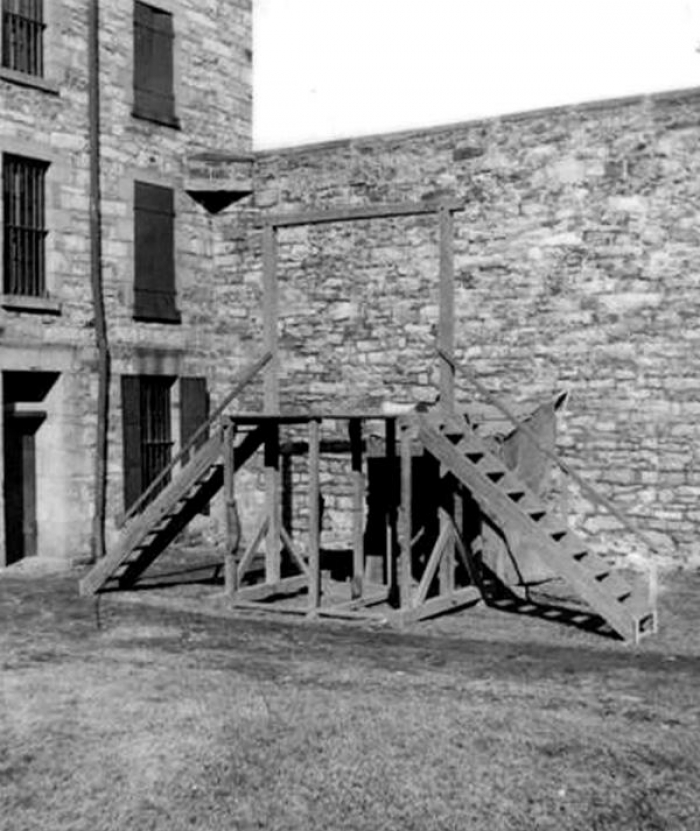 In an 1828 case involving dismissal of a juror who objected to the dealth penalty, the Pennsylvania Supreme Court upheld a conviction saying a judge acted properly to prevent possible jury bias. (An early photo of gallows in a Pennsylvania prison. Hanging was the most common form of executions in the 1800s in America. Photo from the Historical Society of Schuylkill County, Pottsville, PA)

In Commonwealth v. Lesher, 17 Serg. and Rawle 155 (1828), the Pennsylvania Supreme Court upheld a conviction being challenged due to the dismissal of a juror who said he could not vote for the death penalty because of his religion.

This case offers an early interpretation of a state provision providing that “no human authority can, in any case, control or interfere with the right of conscience.”

Morris, juror, opposed capital punishment and was excluded from jury

After being called as a juror, Isaac W. Morris was successfully challenged for cause in a capital case in which he declared that he could not convict Lesher on first degree murder because he held religious beliefs opposing capital punishment. Lesher, after being convicted of manslaughter, appealed on the basis that the judge had acted improperly in allowing Morris’s exclusion from the jury.

He questioned how the court could have compelled a juror “to oblige him to take the affirmation, which in his own heart he was determined to disregard.”

By contrast, Justice John Bannister Gibson rested his dissent on a narrow view of the right of conscience. He believed this right amounted simply to “a right to worship the Supreme Being according to the dictates of the heart; to adopt any creed or hold any opinion whatever on the subject of religion; and to do, or forbear to do, any act for conscience sake, the doing or for bearing of which, is not prejudicial to the public weal.”

Citing the maxim that the will of the people is the supreme law, Gibson wrote that “where liberty of conscience would impinge on the paramount right of the public, it ought to be restrained.”

Gibson argued that the right to conscience would not exempt a witness with the same scruples from testifying or a sheriff with the same scruples from carrying out punishments. As in his opinion in Phillips et al. (Simon’s Executors) v. Gratz (1831), Gibson appears to have based much of his decision on the lack of precedents for the court’s action, and as an opponent of judicial review, he had what he called in Lesher “a horror of judicial legislation.”