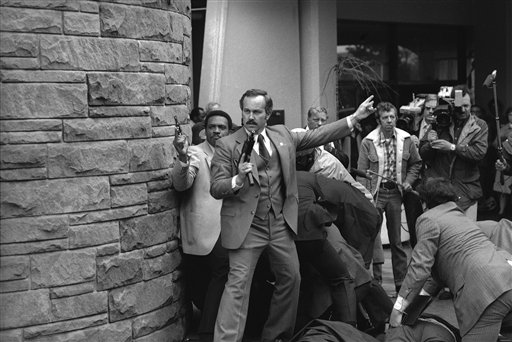 A clerical worker who worked for a Texas constable was fired after a controversial remark during a personal conversation about the failed assassination attempt of then-President Ronald Reagan, leading to a Supreme Court ruling about public employee's free speech rights. Photo of the moments after John Hinckley Jr. shot President Reagan and others on March 30, 1981 in Washington D.C. (AP Photo/Ron Edmonds, used with permission from the Associated Press)

In Rankin v. McPherson, 483 U.S. 378 (1987), the Supreme Court ruled that a Texas constable violated the First Amendment rights of a clerical employee when he dismissed her for an intemperate remark she made about President Ronald Reagan during a personal conversation in the workplace.

Constable Walter Rankin terminated employee Ardith McPherson after she admitted telling a co-employee after the John Hinckley Jr. assassination attempt on Reagan, “if they go for him again, I hope they get him.”

McPherson sued in federal court, contending that Rankin violated her First Amendment rights for terminating her for a personal remark on a matter of public concern that did not negatively impact her performance or office functioning. Rankin countered that he had the right to dismiss an employee who made comments so inimical to the functioning of a law enforcement agency.

The case bounced through the lower federal courts twice, as a federal district court dismissed the action only to have the Fifth Circuit Court of Appeals reverse and reinstate the claim. After the Fifth Circuit reinstated the suit for a second time in McPherson v. Rankin (1986), Rankin appealed to the Supreme Court.

The Court ruled 5-4 in favor of McPherson, affirming the Fifth Circuit.

Writing for the majority, Justice Thurgood Marshall applied the test for public employee speech cases developed in Pickering v. Board of Education (1968) and Connick v. Myers (1983).

Marshall then applied the balancing prong of Pickering-Connick that asks whether an employer’s interests in an efficient, disruptive-free workplace trump the employee’s free-speech rights.

He struck the balance in favor of McPherson, noting that “there is no evidence that it interfered with the efficient functioning of the office.” He also emphasized that McPherson’s job was clerical and she had “no confidential, policymaking or public contact role.”

Justice Lewis F. Powell Jr. wrote a concurring opinion, believing that it was unnecessary to apply full-blown Pickering-Connick analysis. Powell believed that it was clear that “McPherson’s private speech is protected by the First Amendment.”

Dissenters thought remark did not touch on public concern

Justice Antonin Scalia wrote for the four dissenters, accusing the majority of “irrationally expand[ing] the definition of public concern.” He believed that McPherson’s statement was not on a matter of public concern and that Rankin had every right to discipline McPherson for making such a comment. “It boggles the mind to think that she [McPherson] has such a right,” he opined, adding that it seemed inconceivable that one could “ride with the cops and cheer for the robbers.”