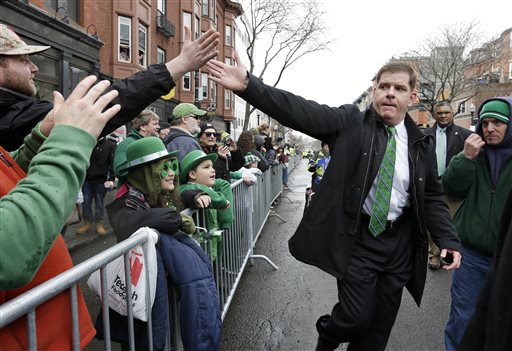 Boston Mayor Marty Walsh, center right, greets spectators while marching in the St. Patrick's Day Parade in Boston's South Boston neighborhood in 2015. Boston's mayors had boycotted the event since 1995, when the South Boston Allied War Veterans Council took its fight to exclude gay groups all the way to the U.S. Supreme Court and won. (AP Photo/Steven Senne, used with permission from the Associated Press)

In Hurley v. Irish-American Gay, Lesbian and Bisexual Group of Boston, 515 U.S. 557 (1995), the Supreme Court established that the First Amendment free speech rights of private groups to define the parameters of their expressive conduct during a parade trumped the provisions of a state anti-discrimination law.

The Irish-American Gay, Lesbian and Bisexual Group of Boston (GLIB), formed in 1992, had wanted to participate in the traditional annual South Boston St. Patrick’s Day parade, in part to show its members’ pride in their dual identity as Irish Americans and gay Americans. When GLIB attempted to register for the parade, its application was rejected by the parade’s organizer, the South Boston Allied War Veterans Council, which said it had insufficient knowledge of the group and claimed concern over security.

Over the next several years, the parties went to court numerous times. The Veterans Council and John J. “Wacko” Hurley argued that the council had a First Amendment right to refuse to allow GLIB to take part in the parade because it disapproved of its message. GLIB claimed that the parade was a public event and, by barring it, the council was violating the Massachusetts public accommodations law that prohibited discrimination on the basis of sexual orientation.

The lower state courts held that because the parade consisted of numerous messages and there was little or no selectivity in deciding which groups were permitted to march and little or no attempt to inquire into or censor the messages of these groups, the council did not have a First Amendment right to exclude GLIB. Moreover, even if there were a minor infringement of the council’s First Amendment right, the state’s interest in eradicating discrimination on the basis of sexual orientation was sufficient to justify it. After the state supreme court upheld the lower court’s decision, the council appealed to the U.S. Supreme Court, arguing the ruling violated its First Amendment rights.

Speaking for a unanimous Court, Justice David H. Souter began by asking whether the First Amendment protects the Veterans Council against being forced to include an unwanted message in the parade. After recounting the century-old history of the St. Patrick’s Day parade, Souter characterized the parade as “a form of expression” protected by the First Amendment.

The Court held that the council was not barring gay, lesbian, and bisexual individuals from the parade as individuals but rather was opposing their participation as a marching unit under the GLIB banner. Souter stated that GLIB’s message — its banner identifying it as the Irish-American Gay, Lesbian and Bisexual Group of Boston — would conflict with the council’s First Amendment right to determine the message it wished to convey in the parade. Even though the council allowed a wide assortment of messages in the parade, it could exclude GLIB if it believed that including it would signal the council’s acceptance of homosexuality.

In any event, the council had an absolute right to decide which participants should be permitted to march in the parade, and the state’s goal of preventing discrimination in public accommodations did not justify overriding its right to determine the content of the parade’s message. “Disapproval of a private speaker’s statement does not legitimize use of the Commonwealth’s power to compel the speaker to alter the message by including one more acceptable to others,” Souter concluded.