Board of Education of the Westside Community Schools v. Mergens (1990)

By Alan Tauber
Related cases in Public Schools and Religion 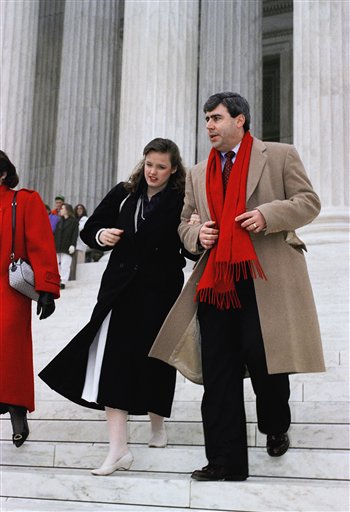 Bridget Mergens Mayhew leaves the Supreme Court in Washington with her attorney Douglas Veith following arguments on Board of Education of the Westside Community Schools v. Mergens (1990). Mrs. Mergens Mayhew triggered the case for students at Omaha's Westside High when she tried to organize a Christian Bible study club. Official refused to approve the club and suggested the students meet at a church next door. The Supreme Court in upheld the constitutionality of the Equal Access Act of 1984, a federal law prohibiting school officials from discriminating against student clubs because of their religious or philosophical views. The Court ruled 8-1 that the law did not violate the First Amendment’s establishment clause. (AP Photo/Doug Mills, used with permission from the Associated Press)

The Supreme Court in Board of Education of the Westside Community Schools v. Mergens (1990) upheld the constitutionality of the Equal Access Act of 1984, a federal law prohibiting school officials from discriminating against student clubs because of their religious or philosophical views. The Court ruled 8-1 that the law did not violate the First Amendment’s establishment clause.

The Equal Access Act requires all schools that receive federal funds and that host a “limited open forum” to provide equal access to all student groups, without regard to the groups’ focus or interest.

Nebraska high school student Bridget Mergens had requested permission to form a Christian club at her school with all the rights and privileges of access and under the same terms and conditions as other student groups, with the exception that it would not have a faculty sponsor. The school denied Mergens’s request, arguing that to allow the formation of such a group would violate the First Amendment’s establishment clause, which prohibits the government from establishing or promoting religion.

The Supreme Court ruled that Westside Community Schools operated a limited open forum, which exists when a public school “grants an offering to or opportunity for one or more noncurriculum related student groups to meet on school premises during school time.” A noncurriculum group is one not directly related to a course taught by the school.

Religious neutrality does not create entanglement

Responding to the school’s contention that allowing the group would cause an excessive entanglement in violation of the third prong of the Lemon test, outlawing “excessive entanglement” between church and state, Justice Sandra Day O’Connor led a plurality in noting that in Widmar v. Vincent (1981), a college equal-access case, the Court had held that the open-forum policy actually avoided entanglement by treating religion neutrally. So long as neutral treatment existed, the act could not be viewed as impermissibly advancing religion.

Justice Anthony M. Kennedy concurred in an opinion joined by Justice Antonin Scalia, parting only on the issue of establishment. Kennedy focused on the fact that the program did not provide a direct benefit to religion and did not coerce students into participating in religious activities.

In dissent, Justice John Paul Stevens argued that no open forum existed in this case and advocated safe-guarding a school’s right to exclude controversial groups while still allowing extracurricular activities.