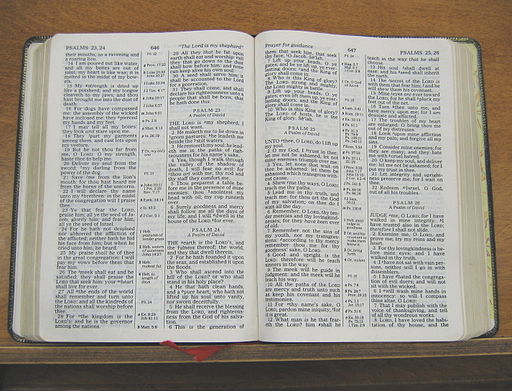 In 1890, the Wisconsin Supreme Court held that reading the King James Bible in public schools violated the state constitution's protection of religious liberty. In this early case, the court said that the "priceless truths of the Bible are best taught to our youth in the church, the Sabbath and parochical schools, the social religious meetings, and, above all, by parents in the home circle." (Photo of King James Version of Bible via Wikimedia Commons, CC BY-SA 1.0)

The decision in State ex rel. Weiss v. City of Edgerton, 76 Wis. 177 (1890), from the Wisconsin Supreme Court under the authority of its state constitution is surprisingly similar to modern First Amendment U.S. Supreme Court decisions dealing with prayer in public schools.

Citizens of the city of Edgerton, Wisconsin, went to court to get a writ of mandamus to prohibit readings from the King James Bible in state common (public) schools. The Wisconsin Supreme Court granted it.

Speaking for the Court, Justice William P. Lyon agreed that the practice violated the rights of conscience of Roman Catholics and others who questioned both the accuracy of the King James Bible and the practice of allowing individuals to interpret it without instruction on the part of the church.

Lyon thought that the practice constituted instruction, even when unaccompanied by comments on the part of the teachers. He rejected the idea that the practice could be justified by practice that had followed the adoption of the state’s religion clauses. Lyon emphasized that the Wisconsin constitution was more explicit in protecting religious liberties than other state constitutions and that precedents from states without such explicit provisions really did not provide much guidance.

Lyon answered the argument that the readings were acceptable because students were permitted to absent themselves by saying that this still denied their equality under the law. He rejected the idea that his decision denigrated religion: “The priceless truths of the Bible are best taught to our youth in the church, the Sabbath and parochial schools, the social religious meetings, and, above all, by parents in the home circle.”

In a concurring opinion, Justice John B. Cassoday examined the history of the Christian church, its fracturing into denominations, and the history of state constitutional development. In a separate opinion, Justice Harlow S. Orton emphasized the importance of common schools. He said that schools had to be “Godless,” not in the sense of opposing religion but “in the same sense that the executive, legislative, and administrative departments are Godless.”

Although this decision is consistent with Abington School District v. Schempp (1963), in which the U.S. Supreme Court used the First and Fourteenth Amendment to overturn devotional Bible reading in public schools, it is in decided contrast to the decision of a Boston Police Court in Commonwealth v. Cooke (Mass. 1859), which had upheld the reading of the King James Bible in Massachusetts schools.