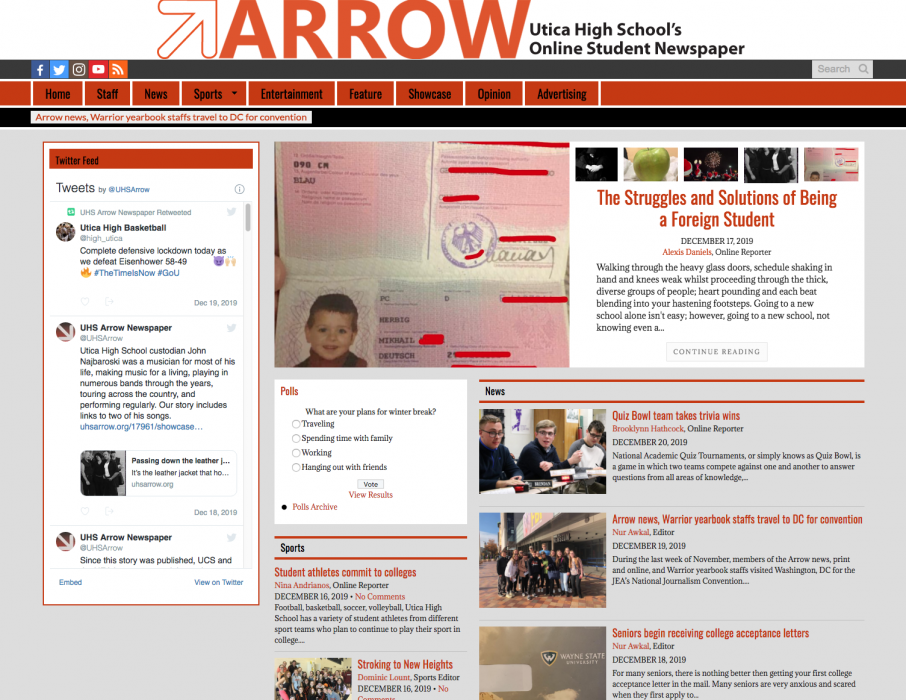 In Dean v. Utica Community Schools (E.D. Mich. 2004), a federal district judge rejected censorship of a Michigan high school’s student newspaper. The Arrow, the newspaper at Utica High School, was an example of a limited public forum, and the school district had no right to censor its contents. (Screenshot of the Arrow website, 1/9/20)

In Dean v. Utica Community Schools, 345 F. Supp. 2d 799 (E.D. Mich. 2004), a federal district judge rejected censorship of a Michigan high school’s student newspaper. Judge Arthur Tarnow ruled that the Arrow, the newspaper at Utica High School, was an example of a limited public forum and that under Hazelwood School District v. Kuhlmeier (1988) the school district had no right to censor its contents.

In 2002 Arrow staff members Katherine Dean and Dan Butts discovered that local residents Joanne and Rey Frances, who lived near the school district’s bus garage, had filed a lawsuit against the district, claiming that diesel fumes from idling buses constituted a nuisance, violated their right of privacy, and harmed their health.

Rey Frances had been diagnosed with lung cancer in 2000. Dean contacted school district officials about the lawsuit, but they refused to comment. She also researched whether exposure to diesel fumes could have carcinogenic effects. She found conflicting evidence, which she noted in her story.

Nevertheless, Principal Richard Machesky ordered Gloria Olman, the newspaper’s adviser, to pull the story, accompanying editorial, and cartoon. The Arrow staff complied but published an editorial on censorship. In April 2003 Dean filed a lawsuit in federal court against the school district.

In his decision, Tarnow said the district’s censorship was “indefensible.” In concluding that the Arrow was a limited public forum, Tarnow noted that during the past 25 years no adviser or administrator had attempted to control content or had required newspaper students at Utica to submit content to school officials for prior review.

He also pointed out that the district’s curriculum guide, its course descriptions, and the masthead in the Arrow showed that the newspaper operated as a limited public forum. Tarnow observed that the article was nonbiased and fair, grammatically correct, well researched, and well written. The administration had no solid reason for censoring the story.

The decision indicates that there are two types of school-sponsored student media: the limited public forum, like the Arrow, where students have the right to determine content either by written policy or by practice, and the nonpublic forum, where school officials retain more authority over content.

Tinker permits officials to censor only if they can reasonably forecast that the student expression would disrupt normal school activities. The district could not prove this in Dean.

This article was originally published in 2009. H. L. Hall was the Executive Director of the Tennessee High School Press Association.